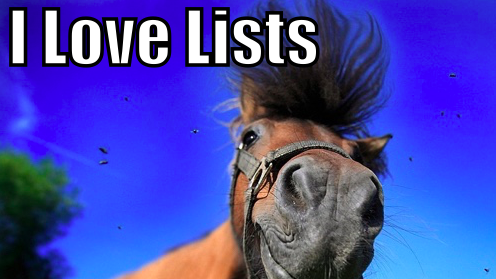 Welcome to #ILoveListsFriday … trust us, it’s a thing.

A nervous horse will sometimes champ on the bit or grind its teeth in anticipation. The earliest citation comes in the Reverend Charles Lucas’s work, Joseph, 1810: “Twelve beauteous steeds, of golden color and with golden manes, champ at the bit.”

Horses first began to chomp instead of champ in a recruitment advertisement in The Decatur Daily Review, 1920: “When the horses arc chomping at the bit and the “yellow legs” mount up and the troop rides forth, there is a thrill that no old cavalryman can ever forget.”

Likewise, the expression connotes a person who is eager to get the party started. One of the first uses of the phrase was printed in the Ohio newspaper the Newark Daily Advocate, 1885: “‘Little breeches’ has been tramping down all the tall timber in his vicinity and champing at the bit tremendously, in his impatience to tackle Gov. Hoadley in a political discussion.”

This phrase comes from an 1864 speech by Abraham Lincoln for his renomination. He was metaphorically telling Americans it would be unwise to switch their political allegiance to another candidate.

We all know high-energy feeds such as oats can make horses frisky, therefore this phrase is associated with an energetic or too playful person. The phrase took many different connotations throughout the millennia until it was finally used by Cheerios in an advertisement. From “Heavens to Betsy” (1955, Harper & Row) by Charles Earle Funk: “He’s feeling his Cheerios” was a slogan for the breakfast cereal from 1950-53.

This expression, referring to keeping a tight rein on carriage horses, first appeared in nineteenth-century American literature and means to be patient. In Picayune (New Orleans) September 1844, we have: “Oh, hold your hosses, Squire. There’s no use gettin’ riled, no how.” It isn’t until much later, in Chatelaine, 1939, we get the more familiar phrase: “Hold your horses, dear.”

5. “If wishes were horses, then beggars would ride.”

This phrase is actually in a Scottish proverb that reminds readers it takes more than wishing to get what you want or need. It is first seen in James Carmichaell’s Collection of Proverbs in Scots: “If wishes were horses, beggers wald ryde.” The date of Carmichaell’s work is unclear but it does appear to have been published in his lifetime and he died in 1628.

6. “Straight from the horse’s mouth”

A horse’s age can be verified by checking his teeth. When horse dealers of yesteryear advertised a horse’s age, depending on their truthfulness, they would either display or hide a horse’s mouth from potential buyers. The expression came to mean getting inside information from a reliable source. The earliest printed version is from the Syracuse Herald, May 1913: “I got a tip yesterday, and if it wasn’t straight from the horse’s mouth it was jolly well the next thing to it.”

The phrase first appears in 1546, as “don’t look a given horse in the mouth”, in John Heywood’s A dialogue conteinyng the nomber in effect of all the prouerbes in the Englishe tongue, where he gives it as: “No man ought to looke a geuen hors in the mouth.”

Historians, however, believe Heywood found the phrase in a Latin text of St. Jerome, The Letter to the Ephesians, circa AD 400, which conatins the phrase ‘Noli equi dentes inspicere donati,’ meaning never inspect the teeth of a given horse. Either way, the expression has come to mean being grateful when you receive a gift, regardless of its monetary value.