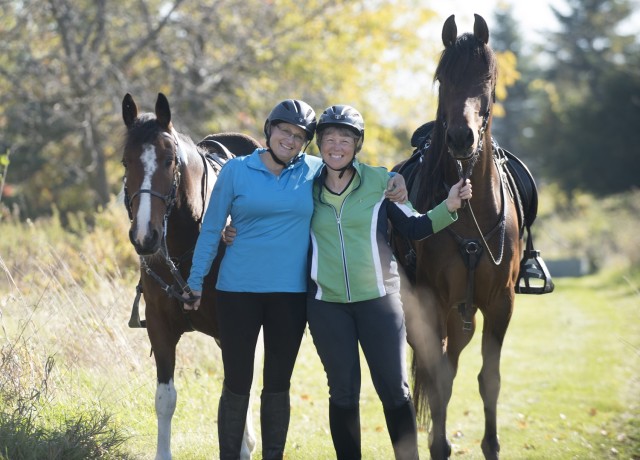 When kidney failure threatened Cathe Cheesebrow’s quality of life, her friend and fellow endurance rider Janet Sarver came to her aid as a living donor. The University of Minnesota’s M Health Blog shares their story.

Cathe Cheesebrow is not the type of person who likes sitting still. A former hobby farm owner and an avid endurance rider, Cathe describes herself as a “doer and goer.”

“The only time I ever sat still was when I came in for supper and then went to bed,” Cathe said.

When Cathe’s energy levels bottomed out in the winter of 2013, she knew something was very wrong. Diagnosed in the early 2000s with kidney failure, the rural Wisconsin resident visited her nephrologist. After testing determined she had reached end-stage kidney failure, the doctor gave her two options: Wait for a donor from the National Kidney Registry—a lengthy process that would likely involve dialysis—or seek out a living kidney donor.

“Dialysis terrified the heck out of me. I did not want to be tethered down,” said Cathe, who received the unwelcome news on July 3, 2014. But on a getaway over the July 4 weekend, her failing health made it impossible for her to get into the saddle without help from her friends.

Desperate for help, Cathe posted a message on Facebook when she returned home seeking a volunteer donor. Little did she know, a close friend had already taken matters into her own hands.

Enter Janet Sarver, who met Cathe in 2003 at a long-distance riding competition. Like Cathe, Janet is an enthusiastic endurance rider, and participates in competitions across the state. Janet and Cathe’s friendship was cemented in 2012 during a 25-mile race.

Janet was one of several friends sharing the July 4 holiday with Cathe in 2014. When the two went on a short ride together that weekend, Janet listened carefully while Cathe described the fallout of kidney failure.

“I listened to her and thought about how we so much enjoyed riding together,” Janet said. “I just got to thinking that [organ donation] felt like the right thing to do.”

Returning home from the trip, Janet began researching organ transplant, and then called the University of Minnesota Health Solid Organ Transplant program to schedule an evaluation. Over the summer, Janet passed several blood type, kidney function and immunology tests with flying colors. But each time she matched, she withheld the results of the test to Cathe.

“I didn’t want to get her hopes up, and then find out I wasn’t a match later,” Janet said.

Finally, in mid-August, Janet got a call from the University of Minnesota Transplant Center staff, who told her she would be a good match for Cathe. As soon as she got the news, Janet dropped everything and called Cathe, who was overwhelmed by the news.

“I don’t know that there are words to explain it. Shocking. Uplifting. It felt like I was whirling around in a tornado,” Cathe said.

“It just came together like it was supposed to be,” Janet said of her decision to donate. “I’m not saying I didn’t have doubts. I talked about it with my husband and family and we researched it a lot. At the same time, I felt like all these doors were opening. Every time I had a question or concern, it all got answered. Everything just lined up.”

On Nov. 12, 2014, Janet and Cathe underwent a kidney transplant procedure at the hands of a highly skilled care team at University of Minnesota Medical Center. In the last five decades, University of Minnesota Health physicians have performed roughly 7,000 kidney transplants, making the program one of the largest and most experienced in the United States.

Cathe and Janet’s transplant procedure went smoothly, and when Cathe woke up the following morning, she felt the difference immediately.

“It was like living in a fog, and having that fog lifted,” Cathe said. “Colors were brighter, my vision was clearer. For the first time in I couldn’t remember how long, I felt like I could jump out of the bed and start running.”

Despite the renewed energy, Cathe’s recovery process—hampered by low hemoglobin levels—has taken the better part of a year. Still, she has already returned to the saddle, and plans to dive back into endurance riding with Janet in 2016.

Asked how it feels to have a close friend choose to become her living donor, Cathe broke down in tears.

“If it weren’t for her, my life would be in the tank. I’m looking forward to riding in 2016, and if it hadn’t been for her selfless gift of life…” Cathe said, trailing off. “I don’t know what I ever did to deserve it, but I can’t thank her enough.”

The article in its original form can be read at the University of Minnesota’s M Health Blog. Go Cathe and Janet. Go Riding.