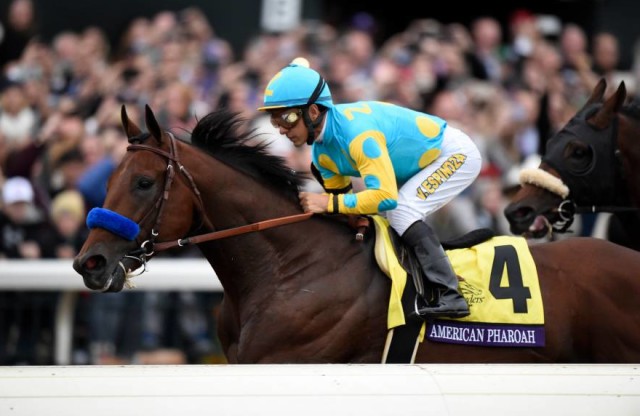 Horse Nation, this is our time: one of our own (equines) is in need of a little show of support in the form of your vote for Sports Illustrated‘s 2015 Sportsman of the Year award. Here’s the scoop!

Typically, whenever a horse is up for the running in a sports award, we as horse people understand that we’re the underdogs, the less-sexy voting option in a star-studded roster of multi-millionaire athletes from various ball sports. We might go cast our vote, hoping that maybe, just maybe, this year the horse world will get the attention it deserves. And usually, most years, we’re disappointed again, cherishing the thought that even though we know that California Chrome or Curlin or Zenyatta was something truly special it just wasn’t in the cards.

But this year, horse lovers, it’s different: American Pharoah isn’t just the Triple Crown winner. He’s not just the first horse to be able to win a “grand slam” by also capturing the Breeders’ Cup Classic. He’s a horse racing hero, a true legend in our own time, the single figure who’s done more for horse racing in a beautiful and triumphant season than any human. And he’s in a position to potentially remind the rest of the world that he really is poetry in motion as one of the top nominees for Sports Illustrated‘s 2015 Sportsman of the Year Award.

Well, I didn’t really need to be convinced, but if that doesn’t really convince you, I don’t know what will. Mark Beech makes an excellent case by highlighting the fact that Pharoah was not only phenomenal on the track but also accomplished the feat of rejuvenating a waning public interest in horse racing.

At the time of writing this article, American Pharoah currently holds 31% of the popular vote with the Kansas City Royals hanging on to a tiny lead with 33%. I’m just going to put out there that this is what the current demographics look like of the United States, with state majorities voting for Pharoah represented in red and the Royals in purple:

And you know what — I’m not trying to belittle what the Royals accomplished this year, because it was a great moment in sports, as were the accomplishments of all of the athletes currently in the running. But I’d also like to add that we have a World Series winner every year. We have a Superbowl winner every year. Someone will always win the Masters, the Open, the championships and gold medals and trophies of the annual athletic calendar. Horse racing is different: we don’t have a Triple Crown winner every year. Truly, for 37 years, we believed we might never see one again. And doesn’t that accomplishment deserve to be recognized?

With a push, American Pharoah could easily take the lead in voting and win SI’s 2015 Sportsman of the Year. Check out all of the nominees and vote for who you think is the most deserving at Sports Illustrated‘s poll.