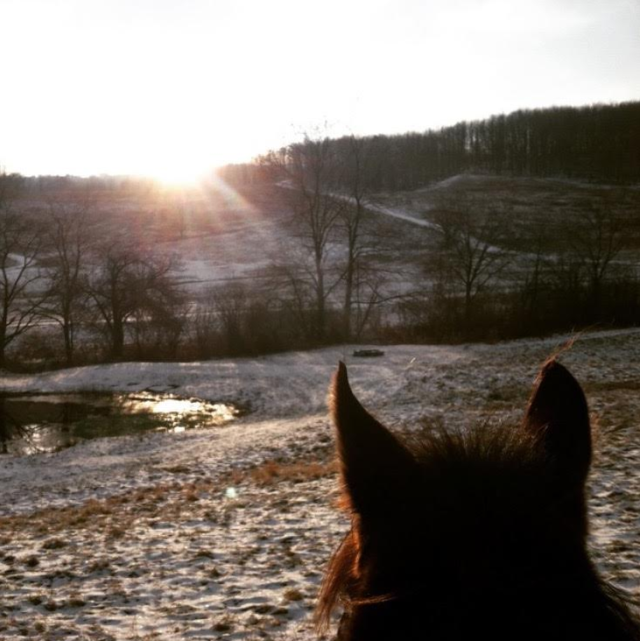 Haley Ruffner gets warm and fuzzy.

There’s always that awkward period of the fall when my horse has grown his winter coat before it’s really cold enough to merit all that hair. It happens suddenly—one day I take off his rain sheet to reveal that my sleek summer creature has morphed into his fuzzy winter self. His transformation is made all the more dramatic by the fact that his summer coat is a thin bleached-light bay color, and when he grows his winter coat, it comes in black and grows straight out, evading any and all attempts to make it lay flat.

However, there seems to be an inverse relationship between his amount of hair and his willingness to cuddle, which is really unfortunate. When he looks the snuggliest, he generally wants nothing to do with anyone kissing his face and telling him what a cute fluff he is. By the end of each winter, he is accustomed to it and accepts the love that’s forced upon him with good grace for the most part; the fall is his transition period where he hasn’t quite decided how he feels about everyone running their fingers through his newly-fluffy coat.

At the barn, a few people have already said that they’ve made him snuggle, and I suspect that he’ll have to get used to being loved on much faster this year with all the students around. Despite his resistance, he looks almost cuter if his ears are back because, with all that hair (and bridlepath that’s desperately in need of a trim), he almost looks like he just doesn’t have any ears when he’s angry. I try not to laugh too much at his comically disgruntled expression for the sake of his pride.

Even though it means doubled cooling out times after riding, a ridiculous amount of sweat, and caked muddy legs that I can’t quite get perfectly clean until spring, I love Cricket’s blanket of fluff—pony snuggles are always the best way to keep warm on all those bitter winter days.