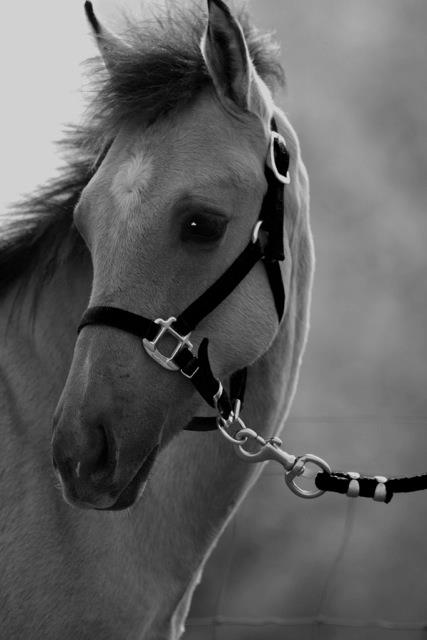 I’m not great at storytelling. My general writing style can be described as informative yet clinical, with the occasional sprinkle of snark and humor. Most of the writing I’ve done has been for scientific/academic purposes for which I spent hours editing and distilling until all that was left was a a series of concise statements free of flowery descriptors, but I’m going to give this whole storytelling thing a try, because this is a story that deserves to be told. I just hope I can do it justice.

Many horse names begin with a prefix, generally relating to the breeder or farm of origin. A few famous prefixes come to mind such as “Fernhill” for eventing horses, “Glock” for dressage horses, and UVM for Morgans. Well, if you look at the USEF-registered name of my little Craigslist horse, you will also see a prefix, and now let me tell you why.

Several years back, after years of riding young, green horses with my greatest asset as a rider being that I was good at staying on, I decided it was time to refine myself. I came across a lovely lady named Sarah with two older, beautifully schooled Arabian geldings, Flame and Bob.

Bob (left) and Flame (right) showing me the ropes

After a few lessons with Sarah, she told me, “I’m not the right instructor for you, but I know someone who would be perfect, and I bet I can get him to come teach you here. His name is Doug.”

Doug, I later found out, had spent a good portion of his life instructing at and managing the UC Davis equestrian center. He was incredibly knowledgeable in all things relating to horses — a real horseman in the truest sense of the word. Sarah got in touch with Doug who agreed to come meet me and watch me ride, but wouldn’t agree to teach me until he “knew if he liked me or not.” He had retired from teaching and only wanted a new student if it would a be fun endeavor for him.

The next week I arrived at the barn to find Sarah setting up a small table with gourmet cheese and champagne in the aisle. When she noticed my quizzical expression, she smiled and explained, “Doug enjoys the finer things.” I nodded, accepting the fact I would be dealing with a typical dressage king, and got my horse tacked up.

I went out to the arena to get warmed and as I was coming back down to a walk, I noticed a tall, thin man with a white beard and mustache sporting wire-rimmed glasses and a flat cap. He acknowledged me with a slight smile and nod and then immediately asked me to run through some figures at the posting trot, sitting trot and canter. When I was finished, I rode over to get his assessment.

He said, “You have the right idea, but I notice you just refuse to ride your corners, and your sitting is horrendous.” When I wasn’t offended, and instead stared back at him with blind enthusiasm, we were in business.

Doug never officially agreed to “liking me,” but after several months of lessons I decided he found me at least tolerable, and that was good enough. I later learned that on top of being a tough but gifted riding instructor, Doug was also a talented photographer, and fluent in the nerd dialect of biophysics. With both of us having a strong science background, we shared a similar thought process making the exchange of ideas easy.

A little over a year after beginning lessons with Doug, I began to outgrow the geldings’ capabilities (based on their age, not level of training) and decided it was time to get Sarah’s 5-year-old filly Daria started under saddle. After a fair amount of time doing groundwork with her, it was nearly time to hop on.

I asked Doug to come evaluate us on the ground to confirm that we were ready. After watching us work for 15 minutes, he approached Daria, whispered in her ear, and told me to head over to the mounting block. I would later learn that he was thanking her for living the life of service that comes along with being a riding horse.

Daria was not wearing a saddle or bridle that day since I had not planned on getting on her, so I assumed I’d just be lying over her back, but nonetheless I grabbed my helmet in case she spooked and I hit the ground. I laid across her back several times, and then as was about to slide off one last time, Doug grabbed my left ankle, hoisted me up, and before I knew it, I was sitting on top of her. That was that. She was officially backed.

It was that day that Doug asked me if I had ever considered working with young horses for a living, which I officially began doing later that year.

Daria and I after about a month under saddle

Just as I was beginning my horse training business, I was nearing the end of my graduate school career, and I decided I needed to reward myself with a horse of my own. I told Doug of my plans to buy a horse, which him made him very excited. He warned me to remain objective while horse shopping and not to make emotional decisions. I assured him not to worry, that “I was a scientist. Being objective is what I do.”

Within a few months I found myself a 5-month-old Kiger colt (Helix) and a 5-year-old Arab cross (Kalvin), but don’t worry: “He’s just a sales project,” I lied to myself. Whoops. So much for remaining objective and logical. I had fallen for my inner child screaming “baby hooooorse!!!!”

Years passed and I continued to take lessons with Doug on Kalvin while waiting for Helix to grow up. Frequently after lessons, Doug would wonder around the pasture using his photography skills to document Helix’s youth. During that time I would tell Doug, often, that Helix was going to be my FEI horse. At first he would smile and nod, but then when it became clear just how trainable Helix was, Doug began to believe it as well.

Finally the time came to back Helix. To this day, I have yet to experience something so uneventful and simultaneously exhilarating. I began with the whispered “thank you” speech Doug had taught me and then proceeded to mount.

Months went by, and Helix spent most of his working hours going on light hacks and working on basic balance and straightness exercises at the walk and trot. I even entered him in a small league show at the introductory level.

The day of the show I got an email from Doug saying he had been admitted into the hospital. He was not feeling well, but news of a good result might make him feel better. Later that day I was happy to be able to report that Helix and I had won his first class with a score of 64.

I assumed Doug, who could be quite the adventurous cook, had come down with a case of food poisoning. I was not ready for the news I received the day I picked him up from the hospital. He had stage III colon cancer. He saw the panicked look on my face and assured me the prognosis was good, and things did seem good when Doug was declared cancer-free after an aggressive round of chemo.

This summer Doug, who seemed thrilled to be alive, and I were giddy planning for the future. We decided it was time to put Helix in a semi-serious training program. Doug was going on a cruise to Alaska with his family in July, and then when he returned in August we would formulate a plan to get my little gelding on the path to FEI stardom.

It was the morning of July 16th when I got the call. Doug had passed away at home, never making it to the cruise.

At first I thought it was some kind of sick joke. There was no way it could be true. In my head, Doug and I embodied the age old horse movie trope of the older trainer and young student working to make a diamond in the rough a champion. This was not the way the movie was supposed to end.  The ending I imagined included me sitting on top of a ribbon-adorned Helix at Devon with Doug standing proudly at my side. We were supposed to have a happy ending.

The grief hit me hard. Time with the horses became more bitter than sweet. It wasn’t until I came into contact with one of Doug’s friends from California that I was able to process my feelings.

I was reminded that there were little pieces of Doug all around, in my riding, in my horse’s training, in my own thought process, and more tangibly in his friends. Those pieces were there for me to reach out and grab when I needed to feel close to him again.

I decided I needed one more reminder that Doug was always with us. I had been putting off registering Helix with the USEF for quite some time and I knew exactly what I had to do. In the “Horse’s Name” box, I typed “DB’s Alpha Helix.” It just felt right. I’m sure you’ve figured out that Doug’s initials are DB. Now every time I hear I hear my horse’s name called aloud, see it written on an entry form, or even just think it to myself, I’ll be reminded that Doug is still with us.

Biz is the author of Horse Nation’s “Back to Basics” series, which follow the journey of a “somewhat ordinary” horse and rider pair as they strive for greatness. Catch up on her past columns by clicking the #BACK TO BASICS at the top of the page.

Biz Stamm is a part-time seed scientist and full-time trainer/riding instructor specializing in starting young horses for sport horse disciplines. She brings the analytical mind she developed while working in a lab to her riding and teaching, emphasizing a thorough understanding of how the horse’s body works. She currently owns two horses: the Kalvin Cycle (Kalvin), a 9-year-old half-Arabian gelding, and DB’s Alpha Helix (Helix), a 4-year-old Kiger mustang gelding. While she is currently pursuing competitive goals, her main goal is to enjoy her horses, and for her horses to enjoy her.