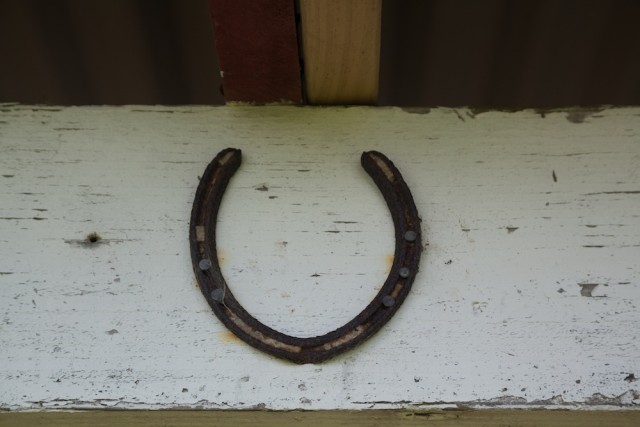 Call it a superstition, but I believe in luck where horses are concerned. Here’s my argument.

We equestrians are a hardworking lot: we devote large chunks of our day to catering to our horses’ needs, which typically involves a lot of physical labor, mud, exposure to the elements and personal sacrifices. Then there’s the riding itself: the countless hours in the practice pen, working until you can’t get it wrong, yet more personal sacrifice, sore muscles and aching backs. With the amount of hard physical work that we all put into our riding, preparing for just one class, one opportunity to show the world how hard we’ve worked, you’d think that luck wouldn’t even come into it: it’s hard work, plain and simple … right?

… maybe. I recall one horse show in my junior days in which I apparently forgot how to jump: I got to the base of every fence and went mentally blank, freezing up and bracing on my pony who kindly ran around every fence and/or dumped me three or four times in the warm-up (as well as the show ring later in the day). Looking back now, I’m sure my show-day disaster was a combination of that kind of sudden, paralyzing self-doubt that plagues a lot of pre-teen and teenage girls mixed with a good dose of adrenaline. But to this day, if the song “Drive” by Incubus (you remember — that kind of mellow 90s-decade West Coast “alt rock”) comes on the radio while I’m driving to the barn, courtesy of the throwback whims of the local DJ, I still change the station. Because that song was playing in the car on the way to that doomed teenage horse show, and it was clearly bad luck.

Do I have any evidence to back this up? Not at all. But I know I’m not alone in my superstitions: the rabbit’s foot is said to be terrible bad luck on the race track. Remember reading King of the Wind as a kid (or an adult, we won’t judge)? The horse’s luck was balanced by the “wheat ear” (as bad as bad luck can get) and the white spot on his heel (a fabulously good omen).

We recite mantras to ourselves (when I was coaching a collegiate team, the beginners walk/jog and walk/trot riders had their own slogan they all chanted before mounting up). Maybe we put on our boots a certain way; we wear jewelry, or maybe lucky socks (or underwear — again, we don’t judge). I’m a big believer in music: I had a particular “good luck” song that I listened to on repeat before intercollegiate shows during my junior year, but if I ever hear the song “Somethin’ Bad About to Happen” before attempting to show draft horses ever again I’m outta there.

Do you have any good luck rituals before you ride? How about a bad luck omen? Or are you a pure-logic equestrian who makes their own luck? Let’s discuss in the comments!