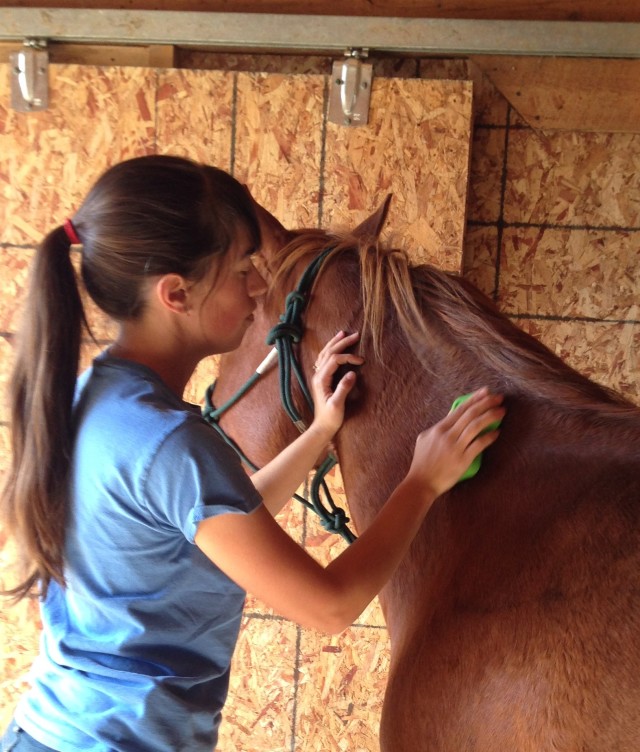 When people ask me what kind of riding I do, I catch myself saying “oh, I’m just a trail rider.” I don’t know how I got into the habit of making recreational riding sound like it’s less of an accomplishment than riding competitively — especially where my horse is concerned. Sure, we’re out riding in meadows and the woods far away from any arena, but that doesn’t mean that my Red is working any less hard: he’s toting me up and down steep hills, navigating slippery or rocky trails, trotting and cantering for long stretches, moving cattle and generally, patiently picking his way out of strange situations that occur when I decide to try out a new trail. At the end of the day, Red’s as much of an athlete as any other horse, with the same tensions and tightness in his body.

Red in his natural habitat, the great outdoors.

So when Dr. Pat Bona’s Posture Prep Cross Fiber Groomer came my way, described as a “curry on steroids, keeping horses clean while giving them a therapeutic massage,” I was excited to give Red the kind of therapeutic attention I felt he deserved. The Posture Prep was designed by Dr. Pat Bona, a human and animal chiropractor, to help horse owners improve their horse’s posture as a way to improve longevity, performance and overall health.

Each Posture Prep Cross Fiber Groomer comes with a basic instruction guide explaining the principles of cross fiber grooming: as the name suggests, the grooming stroke moves across the muscle fibers to move the fascia, the layer of tissue that encloses the muscle groups beneath the skin. Manipulating the fascia should help it move more freely, improving circulation, range of motion and lymphatic drainage.

This introductory video will give you an idea of the goals of cross fiber grooming, as well as an example of how the groomer is used over the hind end of the horse. I love Dr. Bona’s analogy of wearing tight jeans versus sweatpants.

Dr. Bona, of course, having devoted her professional life to developing the cross fiber technique, looks very practiced at working efficiently yet mindfully over the hind end of her demo horse. My first attempts at using the cross fiber groomer are decidedly less proficient:

I worked over Red’s entire body and found some spots where he definitely enjoyed the massage — he got the classic “itchy lip” face and the rhythmical head-nod going on. There were other spots, such as the area over his right hip, where he was pretty sensitive and I could see the muscles in his back twitch — I lightened up the pressure in these areas and will definitely be focusing more attention on them as I continue our sessions. I also noticed when I got to his left buttock, he propped a foot, signifying more tension in this area that was perhaps less comfortable for him as I worked on it.

For best results, the Posture Prep isn’t a one-time-use tool: it’s intended to become part of your daily grooming routine and used over a longer period of time to see changes in the horse’s posture and overall muscular tension. I’ll be using the Posture Prep all winter long, especially as there will likely be plenty of snow or icy days in which we won’t be able to go riding. Keep an eye out for my follow-up review in the late winter or early spring as I track Red’s progress with the Posture Prep Cross Fiber Groomer.

Here are preliminary photos of Red’s current posture: this “elephant on a beach ball” look, where his four feet gather beneath him rather than squarely in all four corners is a pretty common position for him.

“Oh, are you taking a photo? Let me look as wonky as possible.”

He’s also a bit base narrow in the front and slightly toed out in the back.

The Posture Prep can also be used on dogs and humans. I tried it out on Sage, the unofficial dog of Horse Nation, who literally spends our entire time at the barn running around nonstop like a madwoman. Mixed results here — she seemed to tolerate it well enough, but once I got to her haunches she tried to sit on me and was clearly feeling uncomfortable. I’ll chalk this up to my relative inexperience with the tool and will try again when I’m feeling more proficient at the cross fiber technique. I also attempted to use this on my husband who was complaining of a sore shoulder; about that experience I’ll only say that if you’re going to use this on humans I would suggest acquiring a separate groomer from the one that you use at the barn.

With six months of educational videos and articles at my disposal as part of the package deal with the Posture Prep Cross Fiber Groomer (all for $19.99, which I think is a bargain), I’m looking forward to further expanding my knowledge as well as my expertise with this tool. Red deserves it, and I’m willing to bet that your horse does too.

To learn more about the Posture Prep Cross Fiber Groomer and order one for yourself, check out www.postureprep.com!