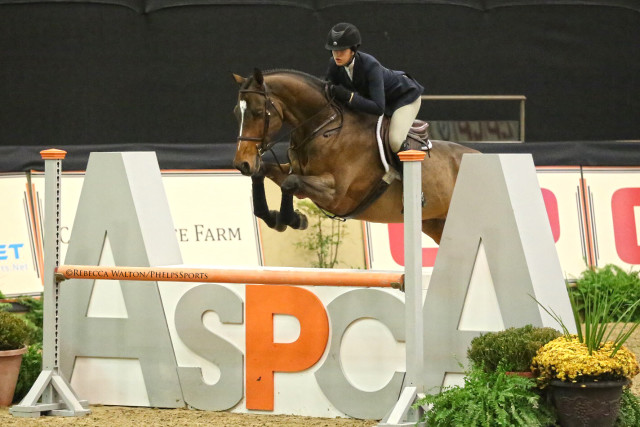 First in the ring = first in placings.

Drawing first in the order-of-go is many equestrians’ nightmare — sure, a select few relish that opportunity and even enjoy it, but you’ve also got to admit that there’s a little bit of advantage to going later in the class. Especially when the class in question is kind of a big deal, like, say, the ASPCA Maclay Finals.

So when Mckayla Langmeier drew that dreaded number-one slot, the reaction was understandably mixed. Her trainer Missy Clark stated in a press release, “When we heard that McKayla was drawn first, I actually walked out of the meeting. I got myself together though, and then we had our little pep talk about ‘you’re just going to go in and do it.’ She also had to go first in the rotation of the top four at the USET Finals, so we’d kind of been in that position two weeks ago, and she nailed it that day. I think Chrystine Tauber said she ‘laid the gauntlet down.’ I said ‘we’re going to do it again,’ and she did.”

Langmeier herself said “I wasn’t the most excited to go first, but it worked out in the end. I was a little shocked. I knew I had to nail it if I wanted to make it into the second flat. I thought with my horse being prepared so perfectly and with my trainers, it went well. I walked the lines multiple times to see where I wanted to be on the backside of the fence, and with my trainers’ guidance, it helped me decide what numbers I was going to do.”

See for yourself how going first worked out for Mckayla Langmeier and Skyfall:

They nailed it so well that they actually scared judge Chris Kappler, who designed the course with Bobby Murphy: “I had momentary panic because she walked in, and she rode the course exactly the way that [judge Ralph Caristo] and I wanted. It was like she read my mind. I said, ‘My God, I fudged this; it’s too easy!’ But it all worked out in the end. I was looking for…. the way you would think of it as the first round of a world cup final speed. It was like they read my mind. It made me feel good about the course too, that the first rider came in and could execute it.”

Langmeier remained in the lead after the flat phase, then returned for a final round over fences. This time, competitors rode in reverse order from the first round, so Langmeier showed last.

Nailed it again. Mckayla’s victory was of particular sentimental value, as her mother Linda was the ASPCA Maclay Champion of 1983. The Langmeiers made equitation history as the first ever mother-daughter pair to capture Maclay titles.

Congratulations to Mckayla and the Langmeier family, and their connections! Go riding!