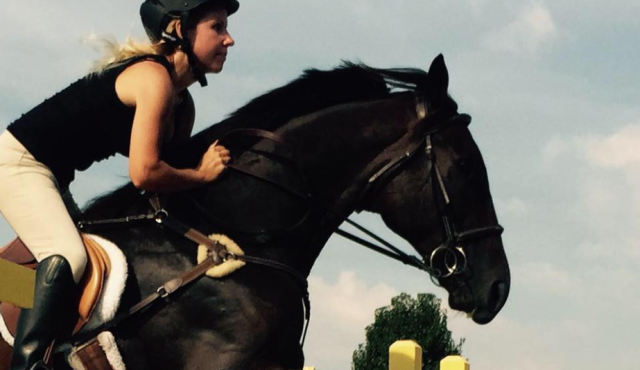 The equestrian community lost one of its own yesterday in Catherine Ford, a mother, OTTB advocate and writer who has generously shared her work with Horse Nation over the years.

Catherine passed away unexpectedly on Sunday morning and is survived by her husband Chris and five children. Our hearts and thoughts are with them, and on behalf of the equestrian community we offer our deepest condolences.

We were first drawn to Catherine by way of her blog, Horses of Seven Hearts, chronicling the intersection of family and horses at the Fords’ small farm on the Tennessee-Georgia state line. Catherine grew up eventing until a fall broke her back and left her needing jaw surgery. Life happened, as it does to so many of us, but horses made a grand re-entrance some 15 years later. It began when she and her family took in a slaughter-bound emaciated pregnant mare, then adopted their first of several thoroughbreds from the track. Since then, as she elegantly put it on her blog, they have been “growing closer to a dream of helping racehorses become the start of someone else’s dream.”

Catherine had an intimate writing style that allowed us a rare window into the moments, both ordinary and extraordinary, that shape who we are both as horsepeople and as human beings. We are honored to have had the opportunity to share her work with our readers, with whom her posts often deeply resonated. She was also unafraid to tackle controversial subjects, as she did on HN just over a week ago with her post “Defining Natural,” a smart and fair reflection on a viral western pleasure video that had been making the rounds.

One of my favorite Catherine posts was one she wrote in May of this year, “God Gave Us Moments… and Ponies.” She wrote it after learning of the loss of a friend’s beloved OTTB, and as her own horse had mysteriously gone off its feed, wondering aloud why it is that we make ourselves to emotionally vulnerable to such physically fragile creatures.

How do we give so much of our time and energy to other living beings and have it be worth it, especially when they can up and die on you in any given moment? Is it a fair trade what we get back? Is it life hours well spent or used up?

Her contemplation, however, is short-lived.

With all the pain and heartache that comes from working with animals, these pieces of heaven are what they give us in return. They might not happen too often but I can’t imagine finding them any other way for me.

Out on the Battlefields with Czech, chasing deer and ghosts.

Spotlight hauling around his boys during morning chores.

Bandon being my best friend and partner through everything we learn together.

It’s completely worth the sleepless nights and fretting over a missed meal or a strange bump. The saying goodbye pain that eventually comes whether or not you are ready for it. It’s worth it for right now. For this sunset on this day, I’ll take it.

Horse Nation is honoring Catherine’s memory with a day of silence and with this request to our readers: Go hug your loved ones. Go hug your animals. For Catherine, Go Riding.