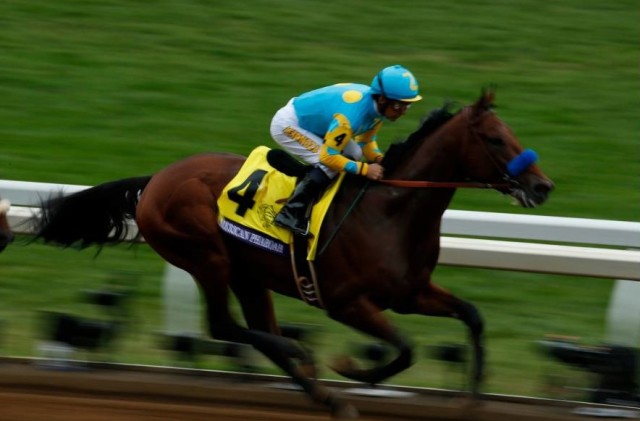 In case you missed American Pharoah’s final performance on the track — or if you’re like us and just can’t get enough of this magical horse — check out the replay here.

A record crowd gathered at Keeneland racecourse on Saturday, October 31 with hopes of witnessing another historic run from the greatest racehorse in the country. American Pharoah was seeking to capture victory in the Breeders’ Cup Classic, the first horse in history chasing this triumph after already conquering the Triple Crown.

A well-loaded field, including past nemeses Frosted and Keen Ice (the latter the only horse to ever best the Triple Crown champion since his crowning) as well as 2014 star Tonalist loaded into the gates beside American Pharoah, and for a moment, time seemed to stand still.

American Pharoah hustled right to the lead, ears pricked as he effortlessly floated to the rail. Effinex stalked close behind with Frosted and Tonalist in striking position. Down the backstretch they came, with all three throwing the pressure on American Pharoah — but as they drew around the final turn, the big bay colt stretched his legs and simply ran away from them all, opening two, three, four, five lengths on the rest of the field. As the wire flashed overhead, it was only Pharoah, far and away, running alone and easy into racing history in one final, glorious romp.

American Pharoah heads to Kentucky’s Ashford Stud, the North American wing of Ireland’s Coolmore Stud and will likely have mare owners queuing up in hopes of breeding the next Triple Crown winner. He’s earned such a life for himself, nailing down nearly every title that North American horse racing has to offer — but from a practical standpoint, he’s also grown far too expensive to insure as a racing animal.

But what do his connections do — owner Ahmed Zayat of Zayat Stables, trainer Bob Baffert, jockey Victor Espinoza? How can any horse fill the void left by the Pharoah’s departure? Time will tell — and the next racing season will be upon us soon.

While we wait to see who emerges as the next big star, we’ll watch replay after replay of American Pharoah, gliding smoothly over the track, ears pricked forward to the roar of the crowd. And we’ll know that no matter what horse captures our attention next, there will never be another like American Pharoah in our lifetime.