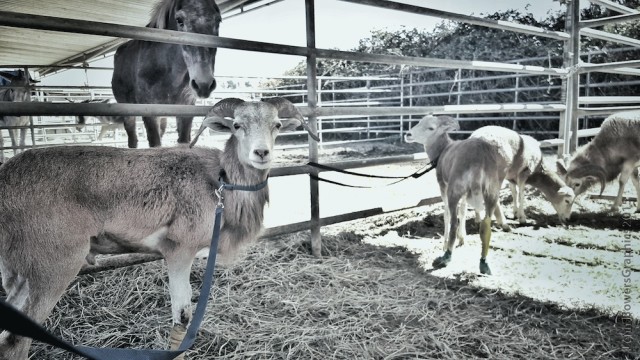 After an unusually dry summer and a multi-year drought, northern California was a tinderbox waiting for a spark. In mid-September, wildfires met little or no resistance from dry and dying trees and tore through rural communities with terrifying speed, often before residents could safely evacuate their pets and livestock (and sometimes nearly before the residents could even get themselves to safety). With nowhere to go, many horse owners were stuck.

“We have 120 acres, right in the town of Jackson,” Bobbi added. “It was just a weird set of circumstances: the county emergency response crews were attending a big training up in the mountains; it had been on the schedule for a year. So the county couldn’t open its evacuation center for the first ten hours of evacuations because there was no one to staff it; they were all at the training.”

Bobbi couldn’t say no to fellow members of her community in need — how could she, in a time of crisis? Word spread that Laughton Ranch could house displaced animals, and before long, the ranch had taken in 856 animals on the premises: horses, goats, pigs, domestic pets. In some cases, without places to go, the owners pitched tents right next to the pens until they could make other arrangements.

Panels and pens were brought in from town for temporary corrals. Over the very first weekend of the wildfire crisis, truckloads of hay were donated. Bobbi called the local vet and paid for him to be on 24-hour standby to help triage and treat animals coming in. Some of Bobbi’s volunteers set up what they referred to as the “war room,” with temporary cell phone lines set up to coordinate evacuations.

Despite the sheer volume of animals, Laughton Ranch ran like a business: all volunteers checked in and were assigned tasks after signing a waiver. Donations of hay, feed and cash were accepted in an organized fashion. Bobbi credits this check-in system for keeping order on the ranch, as she estimates that she had over 1,500 volunteers working throughout the month of September and into October.

These videos take an in-depth look behind the scenes of the operation at Laughton Ranch:

The community support was amazing: six local restaurants from Jackson fed ranch volunteers three meals a day. While Bobbi fed out her own hay for the first few days, feed and monetary donations took over soon after. While no volunteers received any pay for their services, the entire operation was sustained on donations alone after the initial weekend. The local Community Foundation helped set up a way to receive donations, all of which were channeled into relief efforts on the ranch or in the burned-out communities.

While all of this was happening on the Laughton Ranch homefront, up to forty evacuation teams were out in the community helping to get animals to safety. That number of teams eventually was dropped to ten with less need. Teams also hit the road to deliver hay and water barrels to animals that had been left behind but were not in need of evacuation. These efforts are still ongoing today — Bobbi and her crew deliver feed and water containers on the weekend, then leave a duct-tape note with the date and time so owners or other rescuers know when someone was last at the location.

Most of the 856 evacuated animals have either returned home or found new longer-term temporary housing, but forty animals remain on the Laughton Ranch property. Bobbi guesses that they’ll probably be there until spring — their owners have nothing left. Her next round of fundraising is earmarked for buying sheds, fencing panels and basic tools for animal owners without shelters: in many cases, people didn’t need to leave their farms or homesteads but lost their barns or fences, or their supply of feed for the winter. Recent rains have triggered mudslides in burned-out areas. “The needs are ongoing,” Bobbi notes. “The fire is out, but the devastation is community-wide.” She’s already sent the remaining donated hay to the Calaveras County Fairgrounds where it is needed for displaced animals in that area.

A hay donation is loaded into the barn. Courtesy Jenn Bowers Graphics.

Laughton Ranch isn’t a designated horse rescue or evacuation center — it’s an equine business that opened its doors when its community needed it most. We’re proud to spotlight the Bobbi Laughton and her ranch in today’s Standing Ovation.

If you’d like to make a donation to assist in ongoing relief efforts for communities devastated in the Butte fire, please direct your donations to Community Foundation, PO Box 5, Jackson, CA 95642.