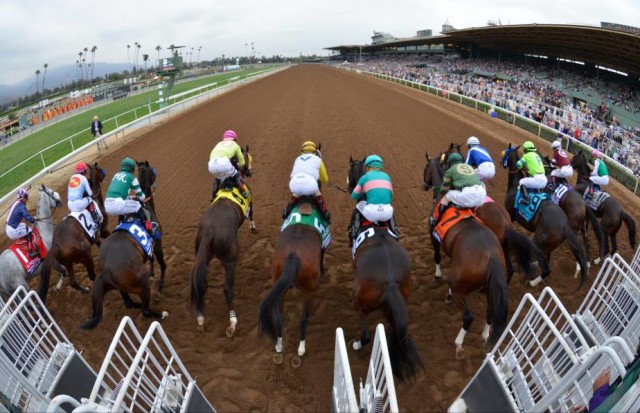 The biggest weekend in horse racing kicks off in less than 24 hours, headlined by American Pharoah’s bid to win racing’s ‘Grand Slam.’ Here’s a preview of what to expect on October 30 and 31.

The Breeders’ Cup World Championships have taken place every year since 1984, crowning the finest racing Thoroughbreds over a variety of surfaces, distances and age groups. The inaugural Breeders’ Cup championship card had only seven races, taking place at Hollywood Park in 1984. Since then, the event has grown into a two-day celebration of the best of horse racing, welcoming champions from all over the world to various American tracks.

This year, the Breeders’ Cup World Championships take place on October 30th and 31st at Lexington, Kentucky’s Keeneland track, the first time the event has ever been in the Bluegrass State — ironic, considering that many champions are born there. Thirteen races will take place this weekend, building up to the final race on Saturday afternoon, the prestigious $5 million Breeders’ Cup Classic. American Pharoah, winner of the 2015 Triple Crown, will attempt to become the first to capture Thoroughbred racing’s “Grand Slam” by adding a Classic victory to his resume. This is American Pharoah’s last race of his life, as the Pioneerof the Nile colt is slated to retire to stud.

Horses qualify for the Breeders’ Cup either based on their performances in graded stakes races throughout the season (points are awarded based on final placing and grade) or by winning a Breeders’ Cup Challenge race (also called the “Win and You’re In” races.) This ensures that only the very best will compete on Friday and Saturday for a chance at glory. While it’s not a given, the placings of Breeders’ Cup race often help determine who receives the titles of Horse of the Year for various distances and age groups.

So what races make up the Breeders’ Cup? We’ve broken down the whole race card below:

Can’t watch the races yourself this weekend? Keep it locked on Horse Nation for recaps and results from the Breeders Cup!