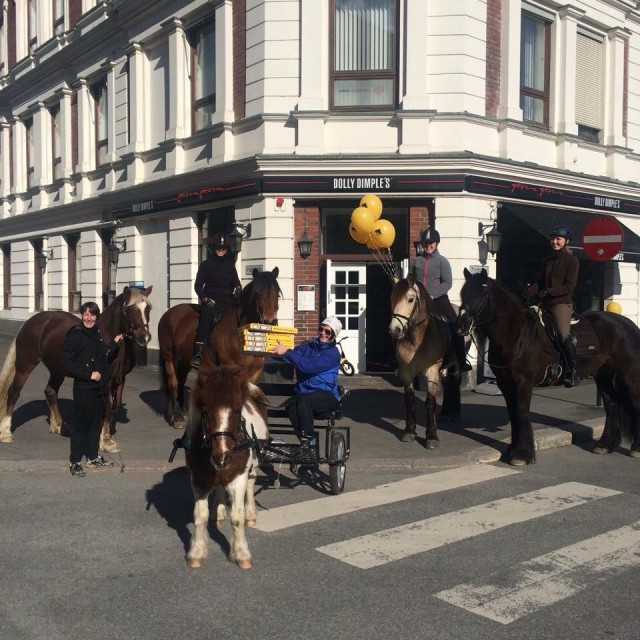 … and Norwegian equestrians are just as texas as we are where free food is concerned. When the Dolly Dimple’s pizza restaurant offered a free ‘Helt Texas’ pie to anyone on horseback, the riders turned out in force.

You may have seen headlines last week about the fact that the word “texas” is slang in Norway for “crazy” — as in, “wow, things got super texas last night at the party.” It’s not meant to be derogatory, just a representative of the “wild west”, slightly Hollywood concept of the kind of hilarious hijinks and rip-roaring actions that the rest of the world believes happens in Texas. (Maybe it does happen there … we’ll have to ask HN staff writer Amanda.)

The news may only be making recent headlines here in America, but “texas” has been in the Norwegian lexicon for years. It’s become more and more common in the past few years, to the point that a well-known pizza chain called Dolly Dimple’s unveiled a new pie called the “Helt Texas,” or “Totally Texas” (or, extensively, “totally crazy.”) This totally outrageous commercial advertises the new creation:

Even more texas was the fact that Dolly Dimple’s added a special offer last spring: show up at a Dolly Dimple’s with your horse, get a Helt Texas pizza for free. And as reader Ragnhild Ekornrud stated eloquently, “as you know, we horsepeople always lack money, so who can say no to free pizza?”

The horsewomen assembled before their intercity hack. Photo courtesy of Ragnhild Ekornrud.

Ragnhild was kind enough to share her experience and some photos from their early-May pizza expedition: she and four equestrian friends trailered their horses into the city of Hamar. Ragnhild led her Welsh cob mare Bobbie Jo; three of her friends rode their Norwegian Dole horses Liagubben, Kolbjoern and Luringen, and a fifth friend drove her Shetland pony Vilbert.

On the road in Hamar. Photo courtesy of Ragnhild Ekornrud.

The pizza shop was a ten-minute walk from the parking lot where the ladies parked the trailer, so the party had to dodge traffic as well as pedestrians, strollers, bicycles and the various other obstacles found on a city street — fortunately, they were able to stick to the sidewalks for the journey for safety’s sake. Wisely, the ladies had also called ahead, so they only had to wait a few minutes for their pizzas once they arrived at Dolly Dimple’s. Wiser still, they were able to load up Vilbert’s cart with the pizzas rather than try to ride back through the city while holding the box!

Dolly Dimple’s even threw in a few balloons. Photo courtesy of Ragnhild Ekornrud.

While getting free pizza was of course a great deal, Ragnhild, like any true horsewoman, was more impressed with her horse’s performance: “I was a bit nervous for how my horse would take the challenge. She’s a red welsh cob mare, with her own thoughts about the world, but we had some safe horses to lean on if she got jazzed up. She really impressed me. I had nothing to worry about, and she was so calm through the whole walk. Of course, we have been out walking before, and she is used to hacking out, but never in these kind of surroundings!”

On the road in Hamar. Photo courtesy of Ragnhild Ekornrud.

Apparently, the campaign really went “completely texas” in Norway, with equestrians all over the country storming the streets to claim their free pizzas. A Norwegian horse page compiled some of the images of riders and horses enjoying their pizza via social media. For another look, check out this video linked here.

Equestrians: we’re the same all over the world, just a little bit crazy. Er, texas.