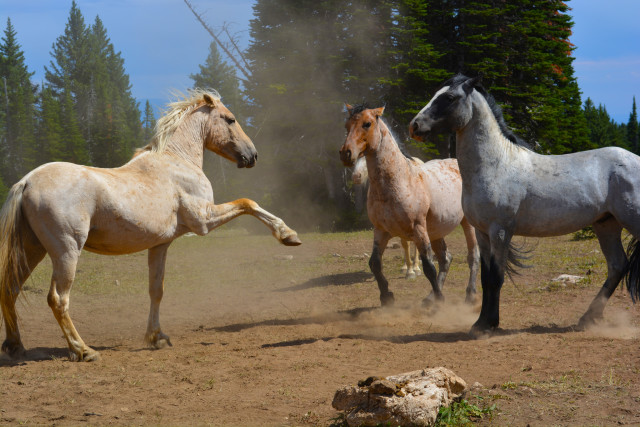 ‘Scientific American’, one of the nation’s premier science publications, recently published that the ‘male-centric’ view of horse herd dynamics is all wrong. It’s not every day that we discover we’re ahead of the science curve, but today is that day.

Reader Jen Wollenberg sent us a link to a Scientific American article, prefaced with the following paragraph:

“I came across this article today which summarizes a recent study on wild horse behavior, particularly related to mares. I thought you all at HN might enjoy it. It’s very interesting, but I suspect the findings will not be a surprise to anyone who has spent a lot of time around horses. I didn’t read the study this summary is describing, but the author of the summary suggests it’s surprising that mares a) sometimes make decisions based on their own opinions, b) sometimes exhibit sneaky or subtle behavior to get what they want, c) don’t always do what the stallion wants, and d) can be remarkably persistent in resisting doing things they don’t want to do. If you’ve ever loved a mare, none of these findings is the least bit surprising.”

Now, we at HN don’t profess to be any wiser in the ways of horses than the scientists going about their studies of wild horse behavior, nor are we sitting here saying “told you so.” The full article at Scientific American is in fact fascinating, and there are several observed examples of mares exhibiting these behaviors in the wild that will both entertain and enthrall you — but as Jen mentioned in her email, it’s not totally unfamiliar territory to anyone who’s spent much time sitting on the pasture fence watching horses at liberty.

One of the biggest revelations by scientists in the article is that “this male-centric view is wrong. Far from being subordinate, mares frequently initiate the band’s activities. The stallions are quite often little more than hangers-on.” Yep, while Hollywood would love to have us believe that it’s the big, bad stallion calling all of the shots, the truth is that the mares wear the pants in herd dynamics. (Monty Roberts mentions this concept in The Man Who Listens to Horses, proving that you don’t actually need a scientific degree to observe this behavior in wild horses.)

When I was a kid, one of my most favorite board games was Herd Your Horses, in which you played a mustang stallion moving about the board collecting other horses to join your herd. While the choice in character was perhaps supportive of a male-centered herd dynamic, it’s also important to note that the “lead mare” cards were highly coveted; if your herd lacked a lead mare you got into trouble at several locations around the board. Given that this board game was basically my only understanding of how wild horse herds worked, it’s nonetheless noteworthy that I grew up knowing that while it was the stallion getting all the glory, it was actually the mare running the show.

The article tells a story about a mare named High Tail and her long and loyal partnership with a stallion named Sam. High Tail never leaves Sam’s side, even when the stallion is old, weak and unable to fight off threats from a younger stallion named Sitting Bull. After Sam’s death, High Tail is observed with a third stallion, Admiral, though eventually he too disappoints her and she moves away. Scientists were impressed with High Tail’s deep loyalty to Sam.

While anyone with a stallion-centric lens would be impressed that High Tail didn’t leave Sam, even when his territory was taken over by a younger stallion, those of us who have spent time watching herd dynamics even in part-time-turnout domestic herds won’t be surprised. I worked at a fifty-stall facility as well as a working guest ranch with over 150 horses, and in both settings we on staff used to chronicle the life and times and drama of our herd dynamics: who was friends with who, which small bands seemed to rule the pasture, what friendships endured or were fractured when a new horse was added to the mix. Horse society is just as fascinating as human society from an observer’s perspective — maybe even more so.

One aspect of the study did surprise me — while I was generally aware that mares called the shots in a herd, I always assumed that the stallion still enjoyed a certain “ownership” of the mares in a band. However, one herd of free-roaming horses (the Garranos of rugged Spain and Portugal) proved that wild mares can decide with which stallions they’ll mate, with one pair of friend-mares going so far as to leave their band and territory each year to go mate with a stallion they preferred to the stallion in their home herd. After mating, the mares would return to their own band and preferred territory, resisting any attempts by their “home” stallion to breed. From a domestic perspective, where most breeding is organized by mankind selecting mares and stallions to pair, it didn’t even occur to me that horses could display this much choice.

The Scientific American article was adapted from The Horse: The Epic History of Our Noble Companion by Wendy Williams, which explores equine society throughout history and its various adaptations. Have you read this book? Let us know what you think!