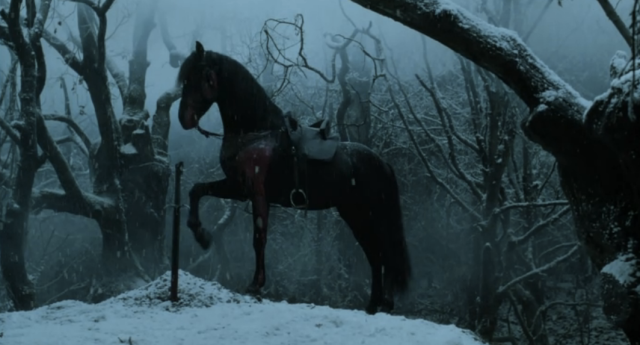 We dig into the story of the most infamous Halloween equestrian.

The story originated in one of two places: Celtic or Germanic folklore.

The Irish dullahan or dulachán (“dark man”) is a headless fairy, usually riding a black horse and carrying his head under his inner lower thigh. He wields a whip made from a human corpse’s spine. When the dullahan stops riding, a death occurs. The dullahan calls out a name, at which point the named person immediately dies. In another version, he is the headless driver of a black carriage. A similar figure, the gan ceann, can be frightened away by wearing a gold object or putting one in his path.

The most prominent Scottish tale of the headless horseman is about a man named Ewen decapitated in a clan battle at Glen Cainnir on the Isle of Mull. The battle denied him any chance to be a chieftain, and both he and his horse are headless in this version of the tale.

Sir Gawain and the Green Knight is a Middle English poem that also involves a decapitation myth.

The German Legends of the Brothers Grimm tell two German folk tales of a headless horseman. One is set in Saxony. In this version, a woman goes out early to gather acorns in a forest. At a place called “Lost Waters”, she hears a hunting horn. When she hears it again, she turns around and sees a headless man in a long grey coat sitting on a grey horse.

In another German tale, set in Lower Saxony, a headless horseman called “the wild huntsman” blows a horn to warn hunters not to ride the next day, because they will meet with an accident. In some German versions, the headless horseman seeks out the perpetrators of capital crimes. In others, he has a pack of black hounds with tongues of fire.

The 1820 short story, The Legend of Sleepy Hollow by Washington Irving, begins in Sleepy Hollow, New York, during the American Revolutionary War. Traditional folklore says the Horseman was a Hessian artilleryman who was killed during the Battle of White Plains in 1776. He was decapitated by an American cannonball and the shattered remains of his head were left on the battlefield. Eventually they buried him in the graveyard of the Old Dutch Church of Sleepy Hollow, where he rises from every Halloween night, furiously seeking his lost head. You can download and read The Legend of Sleepy Hollow at Project Gutenburg.

This original version follows quite closely to the Horseman’s storyline depicted in Johnny Depp’s Sleepy Hollow (1999).  You can check out my spook-tacular review of the movie here.

The truth is, the Horseman didn’t start throwing a flaming Jack o’Lantern until the 1949 Disney family classic, The Legend of Sleepy Hollow, which is probably what people from my generation remember the most.

The Legend of Sleepy Hollow (1949 Cartoon) by DemonPreyer1