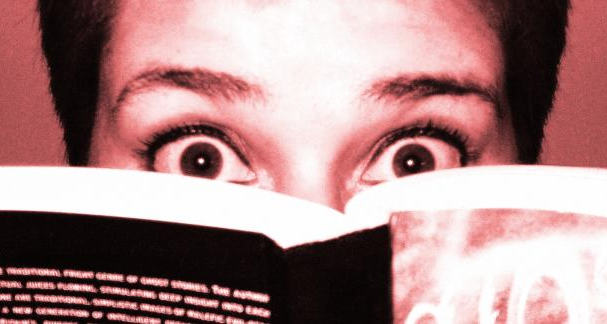 The most spook-tacular time of year is upon us!

5. Fetlocks Hall 3: The Curse of the Pony Vampires by Babette Cole.

Vampires are big, y’all, and it’s about time some of that Twilight fanfare entered the horse world. Set in an equestrian boarding school, Penny and her best friend Pip encounter a group of pony vampires. Shenanigans and chaos ensue. I haven’t read this book, but it seems ideal for kids who love a good mystery and are fans of the Harry Potter series.

4. The Scorpio Races by Maggie Stiefvater

Kate Connolly must face her greatest fear, racing against the blood-thirsty Water horses pulled from the sea, aboard her “plain” pony to save her farm and keep her family together. This book moves a little slow at first, but prepare for a very late night when you finally get to the race.  There is violence and a romance, so I would recommend it for older teens and adults.

For a similar folktale, download and read Andrew Lang’s The Goblin Pony at Project Gutenburg for free!

Tom and Elenna in their quest to rescue a phoenix named Epos, must fight against a purple-winged horse, Skor, and his evil rider, Seth. My daughter has read a few books from this series – there’s upwards of 60 – and has enjoyed them. The language is easy to understand and she enjoys the adventure. They’re scary, but not nightmare inducing. It’s ideal for kids, but parents shouldn’t mind reading along.

The Man-Eating Mares of Diomedes may be the most horrible horses ever created for literature. Diomedes, the tyrant of Thrace, was so demonic he trained them not to eat grass and clover but to devour men. The mares appear in Ovid’s Heroides and in many other Greek and Roman myths. They are best known for their role in Hercules, stealing the mares was his eighth heroic task. To interest kids and teens, I found this graphic novel.  It’s a bit violent – like all Greek/Roman mythology – but I felt comfortable letting my daughter take a peek.

1. “The Spectral Horseman” by Percy Shelley

The author infamous for Frankenstein also penned a ghostly horse story. There’s a chase sequence where even the Headless Horseman would have trouble keeping pace.

“What was the shriek that struck Fancy’s ear
As it sate on the ruins of time that is past?
Hark! it floats on the fitful blast of the wind,
And breathes to the pale moon a funeral sigh.
…It tells the approach of a mystic form,
A white courser bears the shadowy sprite;
More thin they are than the mists of the mountain,
When the clear moonlight sleeps on the waveless lake.
More pale his cheek than the snows of Nithona,
When winter rides on the northern blast,
And howls in the midst of the leafless wood.
Yet when the fierce swell of the tempest is raving,
And the whirlwinds howl in the caves of Inisfallen,
Still secure mid the wildest war of the sky,
The phantom courser scours the waste,
And his rider howls in the thunder’s roar….”

Read the complete poem for free here: The Spectral Horseman.