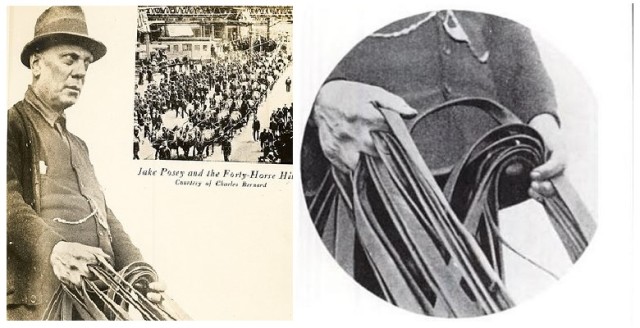 Big Jake Posey may have had a scary appearance and hands that could star in a horror film, but there was much more to this man — and his 40-horse hitch — than meets the eye.

Barnum and Bailey is famous the world over for numerous reasons, but one of the vivid memories that lives on for horse folk was seeing the 40-horse hitch on parade when the circus was coming into town. It was an unbelievable spectacle, and the lone guy in charge of the 40 tons of horse power at the turn of the century? That would be this imposing wall of a man:

Big Jake Posey was a longtime employee of Barnum of Bailey, as well as other circus acts. Circus wagons were a family affair, as his father had been a hitch driver for a smaller circus for sixteen years. Big Jake handled his first team at the age of ten: driving ten white ponies. At Barnum and Bailey, he started as a night watchman, then a harness repairman, and finally a hitch driver. Usually he drove a team of 4-12 horses, but in 1897, Mr. Bailey asked if he thought he could drive 40 horses at once, and Big Jake replied “Mr. Bailey, I can drive any hitch that any other man can drive.”

To train for the premiere, they added extra weight to the harnesses and started with 12 horses, going up in 4 horse increments until they had 40 horses powering down the track four abreast. Big Jake proceeded to then drive the hitch all over the world, for kings, queens, presidents and the common people, to the astonishment of all. The lines alone weighed more than 100 pounds, and to turn a corner, the reins had to let out sometimes as much as 20-35  feet. To manage the team without losing control, Big Jake had assistants who would help feed the line in and out through his hands without getting tangled. The lead horses were more than 80 feet from the seat board.

He had very few accidents, but according to a 1952 article in Billboard Magazine, there was an incident in England that caused some considerable damage:

The vehicle was just rounding an intersection on which a pub was located. The heavy wheels caught a frail support and pulled out the entire side of the old frame building, along with several voluptuous bar maids, who were leaning against the window to watch the parade.

In another incredible incident in Europe, Big Jake once drove the hitch for seven straight hours through the streets of Paris, and at the end of the night, his hands and arms were so swollen that they had to cut his uniform of him to get it off.

The 40-Horse-Hitch from the driver’s perspective.

Big Jake was the last to drive the wagons for several decades until the art was briefly revived by Barnum and Bailey in the 1970s. The act has not been repeated since, and may never be again. Despite his terrifying appearance and hands that surely could have killed almost any living thing in a matter of seconds, his fellow circusmen described him as a good and quiet man who loved his animals and cared for their welfare deeply. He died some time in the 1950s.

We hope you’re enjoying driving the big hitch in the sky, Mr. Posey, and we send you our Horse Nation Salute of Awesomeness. Also, please don’t haunt us. That would be terrifying.