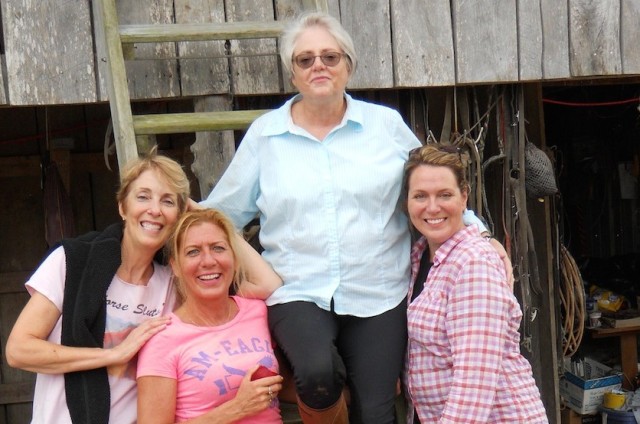 Candace Wade, co-author of ‘Horse Sluts –  The Saga of Two Women on the Trail of Their Yeehaw,’ hosted the first-ever ‘Horse Sluts’ group trail ride and discovered that nothing gels a group of strangers faster than shared time in the saddle.

When we gave “leg” to our book Horse Sluts – The Saga of Two Women on the Trail of Their Yeehaw, my riding and writing buddy Penny and I focused on enticing other mature women (and men) to ease onto the back of a horse. Wine-soaked fantasies included Horse Slut trail rides where we would ride with our readers. Fantasy no more — we did it.

How The Ride Came About

Trolling Facebook for a mate is the kind of risk you warn your teenage daughter against. That’s how we attracted our first rider. Diane D. from New Jersey had read Horse Sluts. She logged onto our Facebook site. We chatted. Next day Diane made plane reservations for her and her two teenage nieces to Nashville. They would meet Penny and me at Big South Fork Recreation Area at Jamestown, TN. Diane (a youthful Horse Slut in her 40’s) no longer owned a horse. She was driven by a yearning to feel four legged power between her legs again. And so, we had one game, new Horse Slut (plus two teens).

Horse Haven of Tennessee is the equine rescue we support with donations from book profits. I contacted Development Director Mary Beth R. after I received a handwritten, heart-driven thank-you note for the first small donation. Having just crept into her 50’s, with job, husband and child, Mary Beth hasn’t owned a horse and hadn’t found time to ride in years. I had her at, “Would you like… ?” when I suggested she join us. We now had two.

With my husband Bill as our riding-trip squire, 6:00 a.m. coffee brewer and 4:00 p.m. wine purveyor, we had seven riders for trail boss and horse provider Larry McMillan (Southeast Pack Trips). When I called to reserve the rides, his enthusiastic response to hosting a group of “sluts”  was, “Rock ‘n Roll!”

Eyes Meet Across the Barn

Penny, Bill and I arrived at Southeast Pack Trips on Friday afternoon planning to meet Diane and the girls for a two hour ride. Mary Beth would meet us at the cabin after dinner. I was zipping my half-chaps when a red rental car whooshed into the drive. Diane popped out with the same magnetic smile I had seen on her Facebook posts. We ran into each other’s arms like seasoned friends.

The flurry of greetings was shocked to a pause by Larry’s truck spitting gravel. He launched out firing gusto. I was thrilled to see his Christy as she aimed right for me for her hug. “Winchester,” Larry’s devoted bear-scaring dog, waited to see what came next. Karen and Dan came next. They were friends of Christy and Larry who just arrived from the Bahamas. What started as seven riders, blossomed into ten. Then — rain — big, bouncing rain.

I don’t mind getting caught in the rain, but setting out in a deluge was a dilemma that caused pouty lower lips. After a lot of horse petting, cloud analysis and no cell phone reception to check the weather, Larry said, “Let’s go out for an hour and see.”  We swung aboard, snapped a bunch of pictures of each other then clopped down the road into the woods. Rain dripped from hat brims and helmets and sheeted off yellow slickers.

Penny in her slicker.

To ride a horse in the rain kindles a childhood freedom we misplace as adults. Getting wet and muddy doesn’t matter. A face-swipe by a fragrant, dripping pine branch makes us laugh. The visceral release of a canter on a loamy path broken by the pauses to pick through sucking mud allows a feeling of truly riding the horse, not just being a passenger.  I felt power, freedom, breathless joy and deep-roots kinship with nature.

Speed was the opiate of the teens. Decades away from being concerned about osteoporosis, hip replacements, back surgeries or the necessity of being at work on Monday instead of at a hospital, they were allowed only short stints as leaders of the herd.

We tracked trails and explored new routes. Larry diverted us to “Rock House,”  a massive ledge that umbrella’d all of us. The one hour ride oozed into three. Ten new riding friends chatted their way back to the barn.

That evening, Mary Beth surprised us at the door of Bacara’s restaurant. Squeals, hugs and introductions continued into the dining room. Her warmth settled on me like a sister, not a stranger. Our table was boisterous with animated conversations and toasts to “Horse Sluts.” The other diners couldn’t know that the joyful noise was adults heady with the delicious “first date” exploration leading us to solid friendships.

Under the ledge: from left to right, Reed, Diane and Penny.

Saturday morning: rain gone, temperature mild. We caravanned to Southeast Pack Trips, where trail guide Reed was finishing re-tightening girths on a string of horses. Larry had to be out of town. He placed us in the hands of this young, masterful horsewoman. I have experienced her calm in the face of recalcitrant horses, revved-up teenagers, cowboy wannabes and, well, bears.

I cinched my new tush-cush on the saddle of my favorite horse. I have endured “skinned knees” on my derrière after two hour rides. This half day ride called for my padded riding undies and my cushion. Sitting tall in the saddle (atop all that padding), I melded into the middle of the eight rider pack.

Riding with a group is a short term marriage of personalities, phobias and fantasies of skills. Our profile included ages 12 to 74 (four 50 plus), hip replacements, back surgery and a cancer survivor. The adults could ride. The teens didn’t know what they don’t know, but were fearless and had heaps of innate talent. I usually accept the thankless role of being the voice of reason. When safety is a baby bird in the grip of trail-egos someone has to make sure we aren’t running the horses downhill or on the paved road or on the trail back to the barn. For me, neck ‘n neck racing down the trail is a really bad idea. I’m also the one to yell, “Go!” when the rider at the top of the rock studded, mud clogged, “180 degree” climb stops at the crest to admire the view with the rest of the horses struggling and stacking up behind.

Horse owners can sneer at us who rent, but our ride was as custom as if we had trailered, groomed and saddled our own horses. We rode as long as we wished. We took turns at the role of bwana, guiding the group through walls of rhododendron and  lavish tangles of ferns. We fast-walked and cantered over the flat paths and rode abreast when space allowed.  We even cantered à la Bonanza up a wide, gravel road. Not owning a horse doesn’t mean you can’t have an epic day exploring the raw beauty of Big South Fork.

The finale of our first Horse Sluts riding weekend was the True West Campground and Mercantile “Crock Pot Cook-Off” to benefit Best Friends Animal Refuge of Jamestown. Penny and I were slated to meet ‘n greet and sign books.

Stellar riding and burgeoning friendships with two terrific horsewomen could only be matched by the enthusiastic reception Penny and I received by several women at the Cook-Off who had read or heard about Horse Sluts. They felt they knew us. They embraced us as comrades. Through Horse Sluts we had woven a bond with women who were strangers, but became warm friends — kindred spirits.  By riding together, we shared the joy of horses. Yeehaw!

From left to right, Candace, Mary Beth, Penny and Diane.

Candace Wade wrote the book “Horse Sluts – The Saga of Two Women on the Trail of Their Yeehaw.” She has contributed to Horse Nation, Mature Lifestyles and The Tennessean. Candace writes political diatribe, wrote “Hillary’s View” pet column and four unpublished film scripts.  She learned to ride at age 46. Still rides at 59+.

“Horse Sluts” is available on Amazon, Taborton Equine Books, Northshire Bookstore and True West Campground and Mercantile. Meet Candace at the Equus Film Festival NYC in November, where she will be sitting in on a literature panel. Keep it tuned to Horse Nation for an upcoming book review!