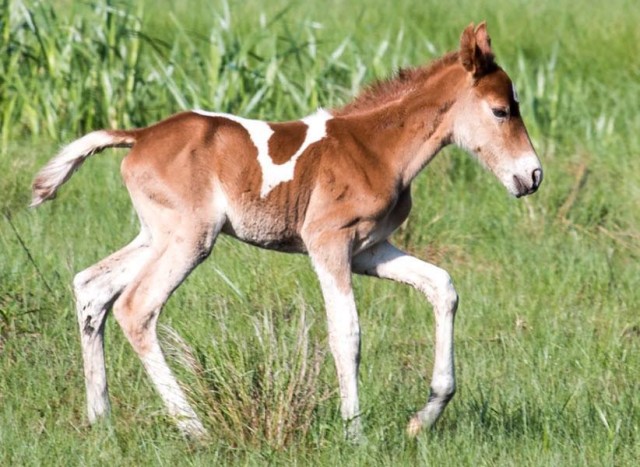 Pony fans rallied to try to track down “Dreamer’s Faith,” believed to have been stolen from the Chincoteague carnival grounds. In a sad turn of events, the pony’s remains were discovered last week in the carnival corral.

Social media buzzed in late September and early October, hoping that by sharing the story of Dreamer’s Faith, the missing filly could be found. One of the Chincoteague Fire Department’s “buyback” foals, Dreamer’s Faith was auctioned off after the annual pony swim in order to be donated back to return to the herd. She was living in a corral on the carnival grounds when it was believed that she was stolen on either September 6 or 7. Due to the nature of the police investigation, this information could not be made public until September 17, when it was announced on the Chincoteague Volunteer Fire Co.’s Facebook page:

Friends, we need help solving the disappearance of one of our buyback foals named Dreamer’s Faith. She was taken from the corral area at the carnival grounds either Sept 6th or 7th. The Chincoteague Police Dept is leading the investigation and numerous other law enforcement agencies in several states are investigating as well including following up on numerous tips. Video from around the area is being looked at closely. Video from the drawbridge is being looked at closely. Neighboring homes are being interviewed. […] We have NEVER encountered anything like this in 90 years and I say to those responsible, you have ruined a good thing and you have ruined a good thing for many, many people. You can rest assured that no stone will be left unturned in finding this pony. We are offering a $1,000 reward for any information that leads to the arrest and conviction of the person or persons involved. In releasing this statement, we will also be contacting several media outlets to help get the word out there. The pictures of this foal do not show her freeze brand of “15” on her left rump. I hope that those of you who have acted and spoke negatively towards us this past week now understand why we couldn’t release a statement before now.

The Chincoteague ponies have become iconic figures for the islands of Chincoteague and Assateague off the coast of Virginia, made famous by the books Misty of Chincoteague and Stormy, Misty’s Foal by Marguerite Henry. Individual ponies within the herds have Facebook fan followings all over the world. When the news of Dreamer’s Faith’s disappearance broke, the story went viral, with hundreds of thousands of Facebook page hits and tens of thousands of shares. The filly was reported on NetPosse.com, the database for stolen horses, and reward money was offered for information leading to the arrest and conviction of the filly’s thieves.

From Roe Terry, public information officer, Chincoteague vol. fire co. Update on our missing pony. New information is now being released by the police dept. and the cvfc for everyone to be looking for a white full size Chevrolet “dual axel ” pick up with a white bumper pull horse trailer that was seen in the corrall with at least two men attempting to catch a foal. Someone in a white single seat electric car may have information that would also be of use. Please contact the Chincoteague police dept. if you saw anything or can link the truck and trailer to the missing foal. Thank you for your support.

The story of Dreamer’s Faith continued to circulate, with more and more messages both of support for the fire department and volunteers as well as hopes that the thieves would soon be found. However, on October 15, the fire department posted this update:

Chincoteague police department chief Randy Mills reports that last night, oct 14 2015, the Chincoteague volunteer fire company reported the missing Chincoteague pony “dreamers Faith” has been located. The remains of the missing pony were found on the fire company’s carnival grounds, in a corner where a chain link fence, several trees, and bushes are located. The remains were found by a lawn maintenance contractor who was working in the area.
The pony was positively identified by a microchip. There were no signs of any criminal activity and the department is considering the case closed.

Unfortunately, the fire department has been flooded with criticism surrounding this entire episode regarding perceptions of the way it handles the Chincoteague herds. While what happened to Dreamer’s Faith is certainly sad and perhaps preventable, it’s important to note that accidents happen with horses more often than we’d like to think about. If we were in the fire department’s shoes, we would ask for patience, faith and trust from our fellow horse lovers. The fire department has reported that they are taking steps to ensure that this never happens again.