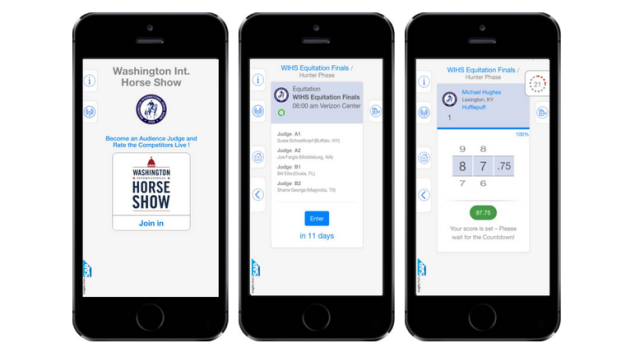 How fun is this? Those watching this year’s prestigious WIHS Equitation Finals, taking place Friday, October 23, and Saturday, October 24, either in person or via the live stream can “judge” the rides themselves via a new interactive app.

The WIHS Audience Judging App prototype, created by the show’s official Technology Sponsor SAP, allows spectators to judge the WIHS Equitation Finals hunter phase, jumper phase, and top 10 work-off, giving their marks and scores to see how they compare with the actual judging panel at the show in real-time. The app then shows the official standings and the audience as well as each fan’s individual standings of the class as users follow along.

Hughes and Skyfall at WIHS, courtesy of shownetllc:

The user-friendly was originally introduced as a co-innovation by SAP and the CHIO Aachen in Germany for dressage and vaulting to further engage and educate audience members in the sport.

“We are excited to progress with the future of equestrian sport and feature this innovative new app that will greatly enhance the experience of our spectators,” says WIHS President Vicki Lowell. “SAP has brought audience engagement to a whole new level in the equestrian world, and we hope this app will be a fun addition for all of our fans. I hope that viewers will be more invested in the results of the competition as they personally rate the rides and learn more about rules, judging and scoring. This app will be the forefront of a whole new way to experience equestrian competitions, and we are proud to lead the way with this modern advance in the United States.”

Julie Winkel has judged the WIHS Equitation Finals in the past and now holds chairs on several different committees that brought her into the development process of the WIHS Audience Judging App.

“It is certainly innovative,” Winkel said of the app. “What I am most excited about is that it is going to be an educational tool for the general public to follow along with the class, to understand scoring, and to be able to watch and compare the riders. It will help the audience gain further knowledge and understand the scoring.”

“I have been a judge in the past for the WIHS Equitation Finals, and I think it is an exciting app to bring everyone together,” Winkel added. “I think it really helps with the interest of the class, understanding what the judges are looking for, and also sometimes how difficult it is for the judges to make a decision when you have so many good riders.”

The “WIHS 2015” app for iOS or Android will be available for download with the start of the show.

As the competition takes place, spectators — either watching live from their seats at the Verizon Center or at home via live stream  at www.wihs.org — can simply hold their smartphones and type their own numerical score into their mobile device rating the equestrian performances like the judges do. Immediately after each ride they can see how their rating compares to that of the judges and the overall audience.

In addition to judging, fans using the app can click on the entries to see biographical information on the riders and horses, get a quick “how to” guide, and access the USEF Rules and Judging Criteria for Equitation to brush up on their skills. Sharing thoughts and following the show on social (#WIHS) is easy using the Twitter link on the app.

About the WIHS Equitation Finals

The Finals, presented by SAP, is an opportunity for 40 of the nation’s top junior talent to compete at a prestigious national event which has consistently served as a proving ground for future Grand Prix and Olympic riders. The 2015 WIHS Equitation Finals will host a hunter phase on Friday, October 24, and a jumper phase and final work-off on Saturday, October 25.

The 57th annual WIHS runs October 20-25, 2015, featuring six days of world-class competition in the heart of downtown Washington, D.C. Come out to Verizon Center to cheer on your favorites and judge live! Tickets are available for purchase at Ticketmaster.com. Tune in to the WIHS Live Stream at www.wihs.org if you can’t make it to the show. The show schedule is available at www.wihs.org/schedule.

Edited from a press release.