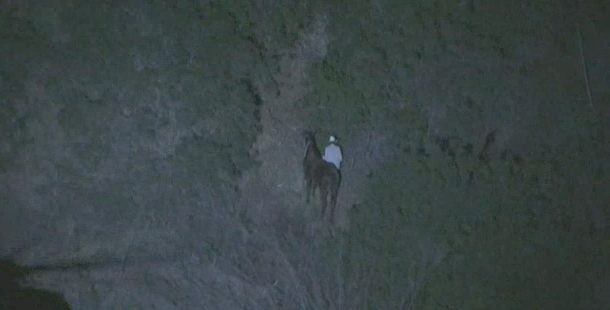 Bringing a whole new definition to the term “horse fly.”

Rescuers responded when a Park Ranger reported the horse’s fall into a 60-foot ravine in the Hollywood Hills on Sunday.

The horse was later described as a 17.1 hh Thoroughbred that lived near the area. “The horse normally makes its way down the Hollywood Hills trail, but lost its footing and tumbled down the ravine,” stated NBC Los Angeles.

The Los Angeles Fire Department set up a rope system to lower firefighters down to the horse, where they discovered he only suffered superficial wounds. Unfortunately, the only way to get him out was via helicopter hoist.

After light sedation, firefighters placed cotton balls in the horse’s ears to reduce noise and placed a mask over its eyes to protect them from falling debris.

The horse was then fitted with a special harness and heavily sedated, before being lifted in the air and dropped off at a nearby boarding stable where veterinarians were waiting.

Know of any other daring horse rescues?  Give us a shout in the comments!