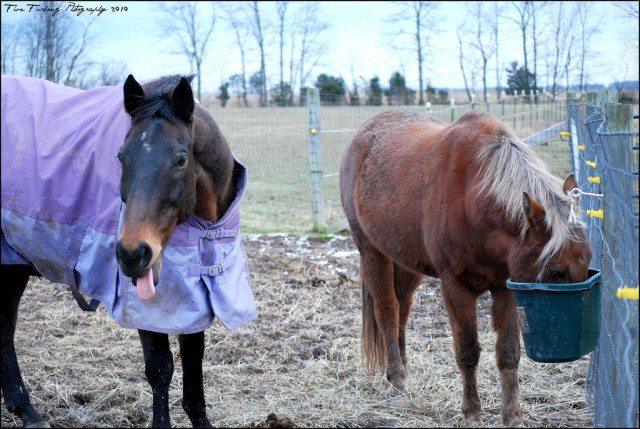 I’d like to think that by now we’ve given you enough time to emotionally recover from our first round equine internet myth-busting — if you missed out on those myths, make sure you read “4 Horse Myths Still Circulating On the Internet.”

These days, you can’t be too careful about believing everything you read — we’re in treacherous territory when almost everyone has easy access to Photoshop and video editing. There are plenty of folks out there who want to prey on the most guileless among us, tricking us into sharing and sharing their totally-fabricated stories or images. Social media has somehow turned us into a population of people who click first and think later — don’t be among those people. We at Horse Nation are here to help (except, of course, for April Fools Day — you’re on your own.)

“Here is some information on winter blanketing that may surprise you.

This is the result of a multi-year study done by CSU, using state of the art thermal detection equipment.

Colorado State University is widely considered to be one of the top three equine veterinary schools in the country: Blanketing horses is one of the worst things that you can do to a horse in the winter.

Horses have the ability to loft and lower their coats to 17 different levels, so it’s like exchanging 17 different thermal weights of blankets off and on them all day and night, depending on what they need- except that we don’t know what they need as well as they do.

Their ‘self-blanketing’ process works a little like ‘chill bumps’ do in our own skin. That’s why long-haired horses may seem fluffier on some days than on others.

Only three things make the ‘self-blanketing’ process not work: blanketing, clipping, and wind.

Not even snow or rain stops their own thermostats from doing the job.

Also horses are in ‘neutral’ (meaning not using energy for either heating or cooling) when the air around them is between 26 and 38 degrees. Otherwise, they’re using energy to control their temps.

So- since they’re cooling their bodies when the temp is over 38 degrees, they’re having to use extra energy to cool themselves when blanketed in temperatures over that.

Any time a horse that is outside and has a long coat is shivering, it’s because the horse has opted to shiver to warm itself, instead of using the option of moving.

Moving generates a considerable amount of heat for a horse, but they sometimes stand and shiver while napping, etc. It does not mean that they need to be blanketed.

However- a horse MUST have a way to get out of the wind in order for their ‘self-blanketing’ abilities to function fully.

It turns out that blanketing is done more for pleasing the human, than to fill a need of the horse. The horse blanket industry has done a great job of making us think that their product is a necessary part of good horse keeping- when it is actually an item that is very seldom needed.”

Just in time for blanketing season, and the endless Facebook debates that accompany it! Colorado State is a leader in equine science and veterinary studies — so if it’s got CSU’s name all over it, we should totally believe it. Except for the fact that Colorado State never actually did this study, or published this article. We exposed the hoax for what it was in 2013, but it’s still going viral every fall — the Chronicle of the Horse even published an interview with a CSU instructor who had no idea where the post came from.

Unfortunately, because the post carries the weight of CSU’s name behind it (even though it was applied under false pretenses) this is going to be a tough one to kill. Whether or not you agree with the “study” is irrelevant — help this myth be laid to rest!

A deaf-mute girl, on a horse that she had ridden for THREE weeks!! not to mention the song she picked out to dedicate…

“A deaf-mute girl, on a horse that she had ridden for THREE weeks!! not to mention the song she
picked out to dedicate to her deceased father! Listen to the announcer’s voice crack!

The horse she is riding is not even hers; she is training it for a client and has had it only 20 days
at the time of the ride shown here.

Note that she rides without a saddle or halter and bit and (obviously) without voice commands.

She is using the method used by American Indians. When you think your voice can’t be heard I
want each of you to watch this Video.

She has no voice. She cannot hear. Yet she has persevered and achieved VICTORY!”

Within the horse world, Stacy Westfall is a household name thanks to her bareback/bridleless reining performances — she won the NRHA Freestyle in 2003 without a bridle aboard Can Can Lena, but it was her 2006 Quarter Horse Congress performance aboard Whizards Baby Doll that put her on the map. It’s a famous video, and you’ve likely seen it before — the Tim McGraw “Live Like You Were Dying” routine, produced and performed in memory of Westfall’s father who had passed away just 24 days prior.

Any horseman worth their salt would immediately recognize this as a pretty killer feat of horsemanship: but then someone started sending the video around with a new caption, describing Westfall as a deaf-mute girl who had only ridden this horse for three weeks prior to this performance, training him with “the method used by American Indians.”

And it went viral:

Now, to be fair, the caption is intended to be motivational, and I’d like to think that a majority of those 800,000+ (!) shares are from non-horse folks who are simply impressed that someone could overcome such (fictional) obstacles on the road to horsemanship. Yeah. Let’s tell ourselves that’s what it is.

There are a few different version of this one floating around on the Internet, but here’s one example:

“Only in Alaska ……. This guy raised an abandoned moose calf with his horses, and believe it or not, he has trained it for lumber removal and other hauling tasks. Given the 2,000 pounds of robust muscle, and the splayed, grippy hooves, he claims it is the best work animal he has. He says the secret to keeping the moose around is a sweet salt lick, although, during the rut he disappears for a couple of weeks, but always comes home…. Impressive !!“

The moose may also live in Maine or Canada, may sometimes occasionally be locked in the barn during the rut, or come home for a variety of other reasons than a salt lick — there’s a much longer version debunked on Snopes.com. No matter which version you’ve seen, the bones of the story are the same.

Unfortunately, it turns out that this is just a very well-done example of Photoshop:

Sorry, would-be Alaskan bush people. That’s not to say that this is an impossible feat; other photos suggest that moose have in fact been broken to harness in the past, though not with the same viral status as this man and his Alaskan logging creature:

If your heart is now breaking all over again thanks to my ruthless crushing of your favorite viral internet shares, the takeaway lesson is simple: be a responsible internet equestrian. Run a quick Google search if something seems just too cool to be true; even better, visit my favorite raining-on-your-parade site of all time, Snopes.com. Together, we can build a better internet!