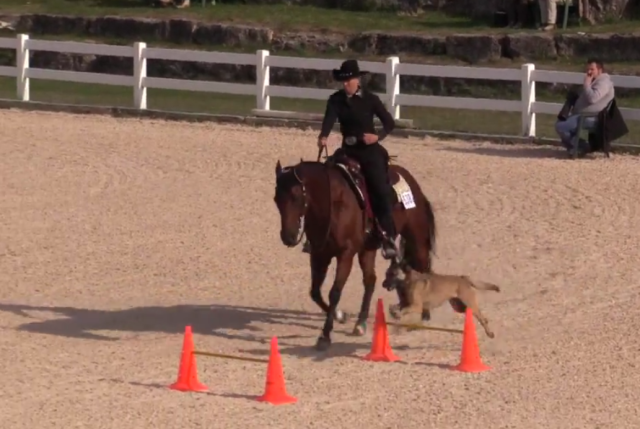 In a new twist on arena trail, horse shows in Germany are adding a new class to their prize lists: Horse & Dog Trail.

The concept is pretty simple: complete the course on horseback, accompanied by your canine friend, who also must complete his own set of obstacles and tasks. Competitors are judged on their style and ability to navigate the course with faults, both as a mounted rider and as a canine handler.

Check out this trio from this summer’s German Open, who make it look oh-so-easy: (must be logged in to Facebook to view.)

Now that’s a team: the horse is beautifully trained as well as quite dog-broke; the dog is clearly in tune to his master’s commands and completes the course expertly (though not without a few exuberant barks along the way.)

For those of us who enjoy a good trail ride with our faithful dogs at our side, or perhaps use dogs in the field to help herd livestock, this looks like the ultimate test of teamwork, horsemanship and canine handling ability. How would you and your dog fare?