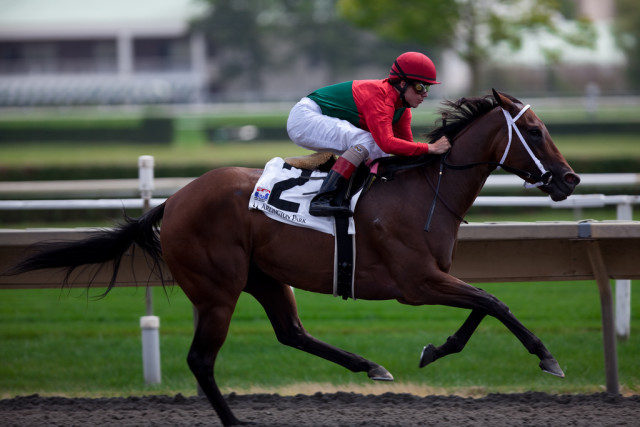 Parx Racing officials have revoked backstretch privileges from an owner who allowed his injured racehorse to go through the New Holland auction against the track’s “zero tolerance” of horse slaughter.

The horsemen of Parx Racing along with the track itself made a commitment to the Thoroughbred racehorse when they created Turning for Home in May of 2008, a 501(c)(3) non-profit organization which helps place retired horses coming off the track with partner farms to be let down and retrained before finding new careers. No horse is turned away from Turning for Home, regardless of injury or lameness; the organization has placed well over a thousand horses since its inception and has been called a model program for other tracks around the country. The entire purpose of the organization is to prevent the horses from winding up in what’s called the “slaughter pipeline,” or the seemingly endless stream of horses shipping to Mexico or Canada to slaughter.

Unfortunately, that was nearly the fate of a four-year-old named Wolf King. A son of multiple stakes winner Rock Hard Ten, the horse finished third in his last start on July 6 at Parx, was pulled up lame after the finish and vanned off the track. On July 20, the horse left Parx; two weeks later, he was discovered on August 3 at New Holland auction barn. Turning for Home would later learn that the horse had a fractured sesamoid; due to the amount of time the horse had been standing on his broken limb, his injury was diagnosed to be beyond repair and Wolf King was euthanized.

So despite this model program to prevent racehorses from winding up at slaughter sales, how did Wolf King slip through the cracks? Parx Racing carefully traced every step of the horse’s journey back to his owner, Mario Arriaga, and punished him by revoking his stabling privileges. Arriaga has appealed the track officials’ decision, and while he has been granted a “stay” and can continue to run horses while the appeals process continues, he still cannot keep horses on the backside. Arriaga filed the appeal on the grounds that he did buy back Wolf King from meat buyers for $900. He states that the horse was supposed to have shipped to a friend’s farm in Maryland but could not produce a bill of sale for that transaction. It’s unclear whether Arriaga was fully aware that Wolf King was headed to New Holland, or if there was some miscommunication or double-dealing behind the scenes en route to Maryland.

While the story of Wolf King is sobering, it’s important to note that Parx Racing chose to uphold the “zero tolerance” policy and act accordingly, making a clear statement that the track is serious about its commitment to the Thoroughbred. The Turning for Home program is designed to be easy for owners and trainers to use: all they need to do is fill out a form, turn over the registration papers, and the organization handles the rest, well-placed right on Parx Racing grounds. With this individual case as the exception, the group has an outstanding record for placing horses through partner farms, providing a great service to ensure that no Thoroughbred from Parx will wind up heading to slaughter. Turning for Home is truly a model organization that we hope will be imitated by other tracks all across the country.