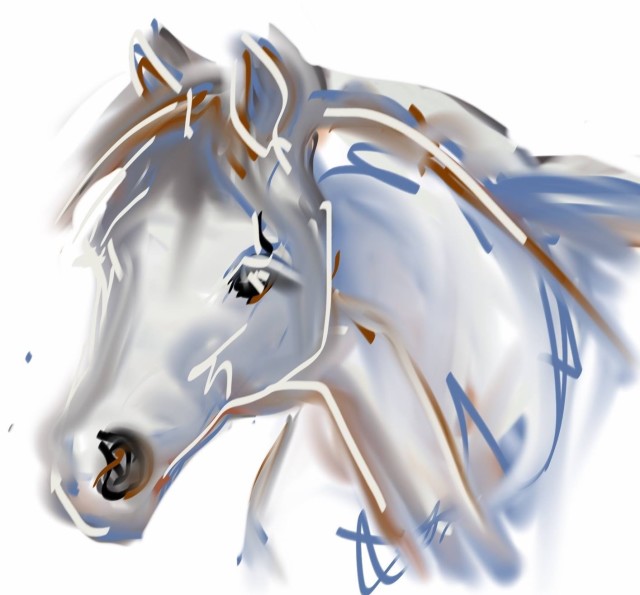 If you’ve ever dreamed of leaving your day job to follow your passions, you’ll love this conversation with Barbara Beckford, the “Pony-poor Artist.” Ten years ago she left a “regular job” behind and turned to horses, art and music to make a living.

Barbara Beckford is a Florida-based artist, piano teacher and horsewoman who juggles her three passions to make a living. While her career path may be uncommon, but it’s brought Barbara fulfillment and happiness. We caught up with the busy Barbara to ask her how she does it.

You describe yourself as “’an eventer trying to support my habit and pony with my art and piano playing/teaching.” Can you tell us more about your jobs?

It’s hard for me balancing three major passions/interests/methods of making money. My piano and horse riding bring in the most steady income. The art is extra; I won’t say gravy because that would imply surplus which it’s certainly not — it’s just not steady. Over time I’ve changed my business plan from selling actual physical art — acrylic portraits, vinyl decals which require a big time and financial investment — to completely digital art. I use a drawing program called Sketchbook Pro which I have on my iPhone and my iPad to draw quick sketches. Sometimes I just see something I like the looks of and I’ll draw it right then, like when I’m at the barn and see a cool shape or shadow, or position of a horse. Sometimes the sky looks so cool I have to draw it, or the white cattle egret flying in contrast against the dark green trees.

I upload those to my Gumroad webpage and either give them away or sell them for a buck or two. They’re basically clip-art that can be used for screen savers; I’ve printed them on coffee cups or they could go on tee shirts. I also do portraits on my iPhone and iPad. They’re quick and sketchy, loose drawings that I sell for $25. I advertise them on Facebook: folks email me a photo, I draw it and email them the drawing back. It’s all quick, cheap and it works because I can fit it in between my other jobs. And I love doing it!

One of Barbara’s digital portraits…

… and the image upon which it was based.

Can we get a little bit more detail about the horse part of your job?

About ten years ago, at the same time I was bailing out of my real job, I got the opportunity to live on a Connemara breeding farm in exchange for helping out on the place. I got board for me and my horse in exchange for feeding and helping with the babies. That developed into breaking the youngsters and showing them in breed shows under saddle and in halter. It was wonderful and I learned so much about breeding, herd dynamics and the Connemara breed.

I started riding a problematic pony who the current trainer was afraid to ride. I thought he was a mean brat but recognized that he was also athletic and smart and talented. I fell madly in love with him and bought him when my thoroughbred died. He’s my main squeeze and I adore him. His name is Buddy. That lead to my current gig with a nearby gal who bought ponies from breeder I worked for; she bought my pony’s brother.  She’s got three Connemaras, two of which I broke; I’ve shown one of them and the owner is starting to do some dressage and jump him. I’m sort of her all-round horse person/adviser. I give her lessons, ride her horses, guide her in general as she had never had horses before. I’m not getting rich but it’s regular; I love doing it and it has really helped her and her ponies. When I first went there she had an un-halter broke stallion, a mare and their baby running around the property. My job was to break the stallion.I gave her two tasks for me to accept the job: build a round pen and geld the stallion. She did both and now, five years later she has three nice riding horses.

Barbara sketching on her iPhone after a barn birthday party (which is why Buddy is still wearing a hat.)

What decisions led to you leaving your “real job” in the first place? That’s a big plunge to take!

Ten years ago a bad divorce left me with a farm I couldn’t afford. When the opportunity to live for free on the Connemara farm came up, I jumped on it and sold my own farm. That freed me up financially so I could quit my computer job, which I hated, and just teach piano while I helped at the horse farm. It is also when I started eventing. I also then started doing lots of different kinds of artwork and selling it.

It wasn’t like any of my career moves were well though out or planned ahead: I was pretty devastated when I had to move out of my house. So really it was sort of the universe pushing me to where I needed to be. But the freedom of not having a mortgage allowed me to pursue the things I love, so I guess I’d say I have made some wonderful lemonade out of what started as a big fat lemon. I’m not rich but I am way happier than when I had my computer job. Because I love what I do, and am very focused on my eventing now, being frugal is not a sacrifice. I’m only a second hand clothes store shopper now, I drive a 1967 Imperatore horse van to shows and sleep in the overhang there. I made quite a bit more money with my computer job but I also wasted lots more and even had lots of debt. Now I have none.

Do you miss anything from the days of having a regular job?

I love the freedom of the things I do for a living; I can’t say I miss anything about my nine to five job. Honestly, it felt rather desperately dead. Now I feel much more alive, I don’t know how else to explain it. I love teaching piano, I am never bored. And I love drawing horses which I can do from anywhere, anytime. I have to constantly hustle now to pick up more work which I never did before. Anytime I can pick up a piano playing gig I do it. I get up at 6:30 every morning to practice piano for a couple of hours, then I go feed horses and ride. I have some piano gigs where I accompany kids in their violin lesson and recently I was the pianist for a Broadway Musical Review at a local playhouse. It was a terrifying amount of music to learn in a short time but I pushed myself in spite of not believing I could possibly succeed. And it went great and taught me a lot — sort of like eventing.

Art-wise, I pick up jobs whenever I can. I illustrated a Chinese veterinary medicine herb book; I drew 300 plants which are made into herbs. I have done watercolor portraits at breed shows. At night or wherever I can squeeze it in, I draw on my phone or iPad and send the sketches up to my website to sell. Because I’m juggling several different occupations, I have to try to be efficient. What I’m trying to do with my art now is have horse and other drawings and clip art on my website that folks anywhere in the world can download for a buck or so. I just draw and upload it; when I’m on a roll I can do in about five minutes. Because it’s all digital there’s very little overhead and once it’s uploaded I don’t have to do any more with it, anyone anywhere can just buy and download the images.

My fun, my main passion and hobby is my horse and eventing.  That’s my reason for hustling, so I can event and take care of my pony.

Let’s talk a little bit more about your artwork — have you always been an artist?

I think drawing horses was my very first activity, even before piano which I started at four. I don’t remember before I was drawing horses. My dad would bring home reams of paper from work and I would just sit and draw with a number two pencil. It was very wasteful!!! I have images of paper everywhere on the dining room table and floor. My parents were very tolerant.

Later in life I started playing with acrylics on fabrics: I’d do wildlife paintings such as puffins and baby seals on sweatshirts and jeans jackets. So I guess after pencil horse art, I branched out into doing wildlife in pencil and acrylics. And then I ventured into watercolor. It’s very different, you have to think very differently when painting watercolors. You can put really cool colors into horses’ coats with watercolors, purples and blues in shadows.

The completely digital thing is fairly new, maybe two months. When I’m actively marketing it on various Facebook horsey pages I’ll generally do a couple portraits a week which is about the same number of sketches I’d generally do. So it’s about 50/50 commissioned/quick sketches with BIG variation. I do struggle a bit balancing the various things I do, changing my focus from one to the next. But it’s survival for me, so I’m continuously trying to figure out how to do it better. I love doing portraits but if I can also get the clip art that’s already finished, selling, it’s passive income. I think like most artists I struggle with the marketing part of art. It’s vital but not something most of us enjoy.

Do you have any advice for fellow horse enthusiasts who are looking to leave their day job and find a path in some part of the horse world?

I can’t offer advice on going professional in horses specifically but I will say that if you love what you do, be it art, music, horses, whatever, you will be sincere and you will be lots better at it and much happier working in it than doing something you don’t like simply for a paycheck. I can’t imagine having to go back to a 9 to 5 job where I felt like I was constantly faking it. I’ve never been a very good faker.