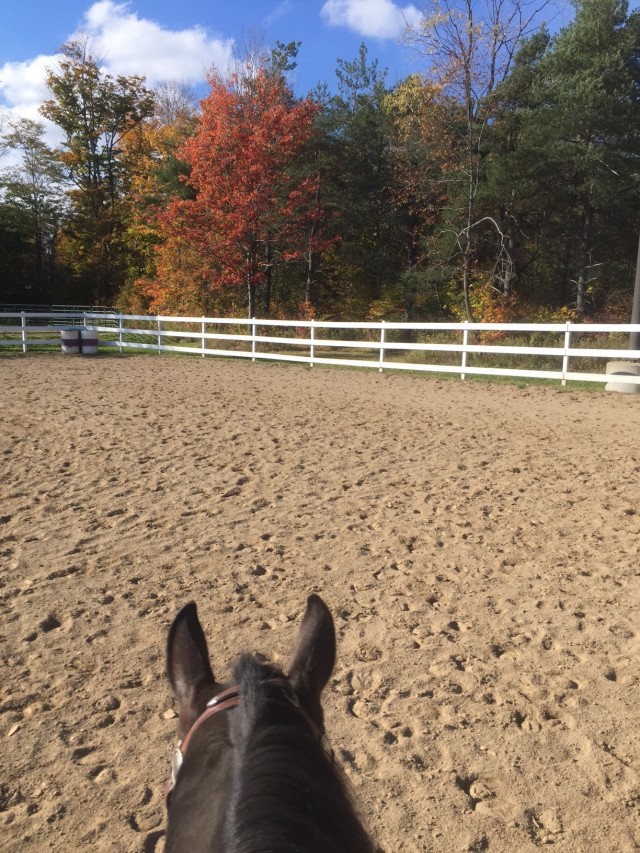 Midterms kept Haley from her horse all week long.

Photographic evidence of Haley’s sole ride on Cricket this week.

Today marks the end of a long and harrowing midterm week, and when I first started to write for this week, I realized I didn’t really have any new barn stories since I haven’t been to the barn except for practices. However, I think there’s something to say about the fact that I’ve neglected to go to the barn except for when I was scheduled to.

I can’t say that I sat tormented at my desk, studying reluctantly and wishing that I could go to the barn; rather, I was just so busy that I didn’t even notice I hadn’t ridden Cricket until I got on him yesterday and he was much more fresh than usual.

College exam schedules are an entirely new concept to me—there’s so much more independent work and studying that needs to be done that I was a little overwhelmed the last few days before midterms. In high school, I can’t say that there was much I needed to really study for, so taking classes now that require several hours of studying has been an adjustment. There were a few late nights and missed riding times, though I can’t say that Cricket minded in the least bit.

This week, I have learned a great deal about myself and my study habits as well as about how best to prepare for exams—for finals week or any other major exams, I now realize the importance of planning ahead to ensure that I have adequate study times in addition to having time to spend with Cricket (even though this week has probably been his favorite week so far, with plenty of mud to roll in outside and no work).