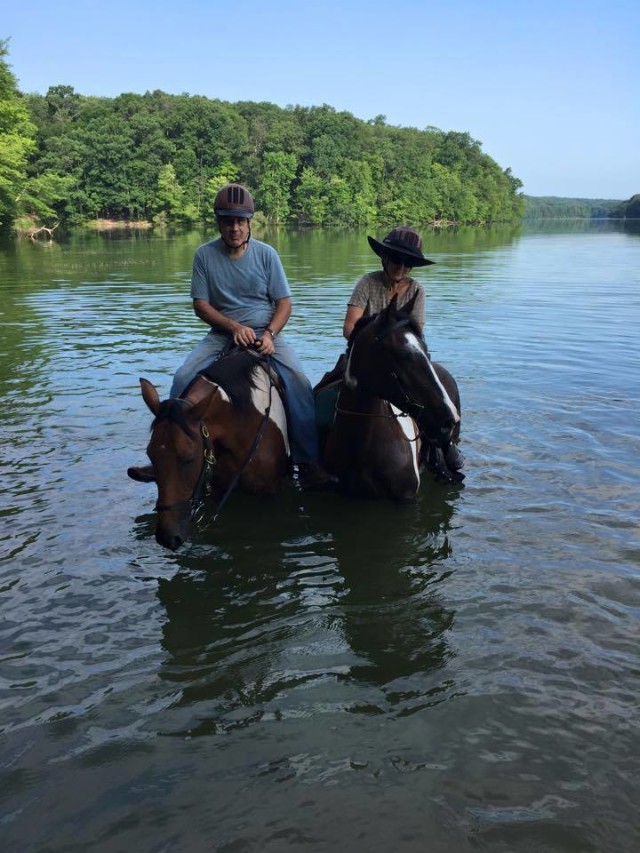 Meet Eleanor Vallone, who has saved hundreds of horses from meat sales.

Eleanor Vallone is not a stranger to managing horses: in her equestrian lifetime, she’s done everything from creatively keeping horses within the city of Philadelphia to running a 130-stall show barn. It’s her current position in the horse industry, however, that brings her the most satisfaction: while owning and maintaining a boarding facility for trail riders, Eleanor also purchases horses from the notorious New Holland auction, frequented by meat buyers out of Canada. She takes them home, quarantines them, nurses them back to health, trains or retrains them as trail horses, and then sells them to new, loving homes. She does all of this work out of her own pocket.

We caught up with Eleanor to talk about the horses she rescues.

“I don’t make money,” Eleanor admitted. “But I can usually break even. It’s not about the money anyway; it’s just gratifying for me to get these horses out of a bad situation and into good homes. The horses pay me back everything I need.”

It’s taken Eleanor many years of hard work and study to be successful at what she does: “I made mistakes — it’s not an overnight thing, to learn all of this,” she states. By studying how to profile horses, she’s learned how to recognize if a horse has been “aced” or sedated; she can tell from a horse’s muscling if he’s favoring a leg. She assesses conformation, and also closely analyzes a horse’s “eye”: is it a good candidate for rehoming? Eleanor warned me that there are many risks involved that simply can’t be seen from a visual inspection — but generally, only one horse in twenty turns out to be something different from what she thought.

But just as important as selecting a good horse, it’s also critical that the horse then be paired with the right rider when the time comes for it to find a new home. Eleanor doesn’t hesitate to let prospective buyers know if she thinks a partnership won’t work out — after all, she’s responsible for helping ensure that these horses don’t wind up back at the sale. Eleanor’s been called to help “fix” rescues that perhaps, in her opinion, shouldn’t have been rescued in the first place, not when so many more suitable horses are going to slaughter.

Here’s a video of one of Eleanor’s New Holland rescues, a Haflinger mare named Winnie, excelling in her new home. (Must be logged in to Facebook to view.)

Eleanor Vallone look how amazing this pony is. She has her forever home. We love her so much!!!

In between bringing the horses home from New Holland and partnering them with good homes, Eleanor quarantines her animals in a separate barn, far away from her boarders so there is no chance of contaminating her own herd. She also has access to an additional facility to house horses in quarantine. She often has to deal with shipping fever, infections, thin horses who need weight, overgrown hooves in need of careful trims or dental work. Often, the task of of rehabbing these horses becomes a labor of love.

Eleanor refers to one story in particular, a recent rescue she named Lala. She found the spotted mare, appearing to be a draft cross, at New Holland in June.

“I checked her temperament, her soundness, and liked her — but I was outbid by the meat buyer. She was big, and heavy, and exactly what he was looking for to fill his trailer. I went home, but her face bothered me — I kept seeing her face. So I decided, okay, let me sleep on this.

“I woke up and I was still bothered by this mare. So I got in touch with the buyer — the trailer was already gone. I paid him $200 to turn the truck around, so he called up his driver and made him drive all the way back to New Holland. The mare already had the meat tags on her back.

“She rewarded me by getting sick; she had shipping fever. As she recovered, I learned her personality a little bit at a time. I broke her to ride, and by September she had found a great new forever home.”

Eleanor and Lala (left) on a trail ride. Lala now has a forever home with a new owner.

While Eleanor is proud of the fact that she’s saved an estimated 250 horses from going to slaughter, she’s also pragmatic: each horse that doesn’t have to ride the trailer to Canada is replaced by another. Her outbidding a meat buyer isn’t making a dent in the slaughter industry because of the volume of horses going through the sale. Real change needs to come in the equine industry itself to prevent horses from winding up in that situation in the first place.

For the horses Eleanor takes home, however, she’s made all the difference in the world.