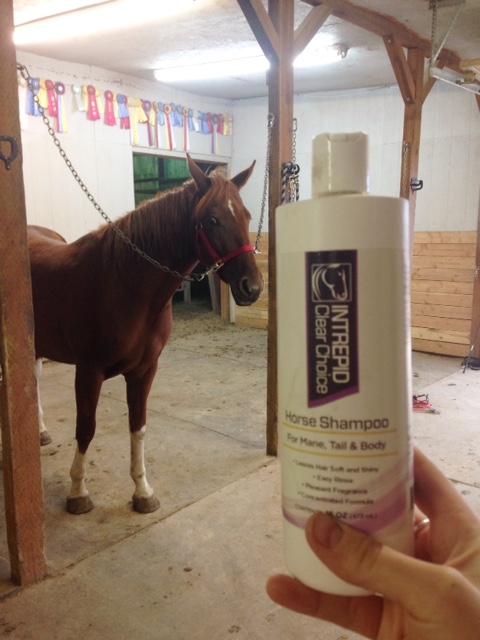 Making my mustang cleaner than she deserves to be.

I admit it. I don’t bathe my mustang as much as George Morris would have me bathe her. I’m guessing he has a nice working student or six who responsibly wash, rinse, soak, liniment, cold-hose and rub dry every horse George Morris might or might not touch that day. Then again, George Morris probably doesn’t have any mustangs. The point is, she’s a dirty little mongrel, and she likes it that way.

But when my dressage instructor pointed out during our lesson that my horse was just a wee bit disgusting, and then pointed it out again later on the social medias, I realized she probably had a point.

Maybe I should bathe her more not in spite of being a mangy mustang, but because she’s a mangy mustang. After all, if we’re trying to prove a point here about mustangs being classy little underdogs, we could probably try a little harder on the “classy” part.

“WHAT IS THAT FOR?!” ssk the whites of her eyes.

The first thing I noticed about the shampoo was the nice but subtle smell. It wasn’t overly filled with a ton of extra perfume fumes, just a nice gentle fresh scent.  I also really liked that this product was more natural than many other shampoos. It does not contain diethanolamine, a sudsing chemical which can irritate the skin and isn’t super great for the environment.

It’s not a super sudsy product once it goes on the horse. In the bucket, yes, but the suds seemed to dissipate quite a bit as I worked the shampoo into her skin. I could definitely tell that the product was doing its job, but because it wasn’t overly sudsy, it wasn’t always easy to tell what spots I had missed. That being said, there’s plenty of science to suggest that suds aren’t really the end-all be-all of true clean, so this wasn’t necessarily a negative in my book.

The proof was in the pudding when during the rinse, I saw a LOT more dirt coming out with the shampoo than even came out in my initial currying and wetting. Moreover, when I came back the next day and the mustang mongrel had spent the evening trying to redevelop her disgustingness, the shampoo had left her hair soft and slick, and it was a LOT easier to get the grime off that day than the previous day, and that’s not always the case after a bath. Also, a week later, her white tail is still quite clean, soft, and shiny. Not greasy shiny, just healthy. That really impressed me.

It’s so shiny! I didn’t even know it could BE shiny!

Overall, I would say if you’re a sucker for suds, you might be a little underwhelmed by this shampoo at first, but if you’re jonesing for a deep clean without a ton of extra chemicals, Clear Choice is exactly what it claims to be.

For more information, check out Clear Choice at Intrepid International!

Go Riding (and then bathing!)