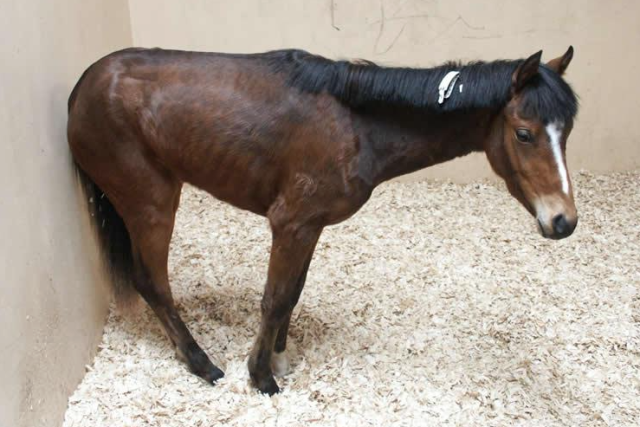 Findings from a study have proven horses with the rare nerve condition have similar signs of disease as people with Alzheimer’s.

Researchers from the University of Edinburgh’s Roslin Institute and Royal (Dick) School of Veterinary Studies have just released findings from the study, which looked at nerve tissue from six horses that died from equine grass sickness.

Photo Courtesy of the University of Edinburgh

What the muck is Equine Grass Sickness?

Equine Grass Sickness is a disease where parts of the nervous system are damaged. The main symptoms are gut paralysis and muscle tremors. The cause is unknown but veterinarians believe a toxin is involved. The latest research theorizes the disease is caused by Clostridium botulinum, a soil-associated bacterium. The disease occurs almost exclusively in horses with access to grass.

The disease was first diagnosed in 1907 in Scotland after an outbreak in army remount horses. The incidence of Grass Sickness became so bad during the 1920’s that many historians believe the introduction of tractors was artificially accelerated as a result.

It is found predominantly in England, Wales and Scotland. There have been two known cases in North America. A similar condition affects cats, dogs, hares, rabbits, llamas and possibly sheep.

For more information check out the Equine Grass Sickness Fund.

How is Grass Sickness linked to Alzheimer’s?

Nerve tissue from six horses that died from Grass Sickness contained amyloid proteins. Amyloid proteins are the starting point for amyloid plaques, one of two abnormal structures found in the brains of people with Alzheimer’s disease. These abnormal structures may be one reason why patients have nerve cells in the brain that stop working, lose connections with other nerve cells or die.

This protein “misfolding” is particularly found in certain regions of the brain that are important to memory.

Dr Tom Wishart, from the University of Edinburgh’s Roslin Institute, who led the study, told Neuroscience News, “This is the first study to show similarities between an apparently unrelated neurodegenerative disease of large animals and human neurological conditions. Although the causes of these conditions are unlikely to be shared, the findings suggest that similar mechanisms could be involved in the later stages of disease.”

Courtesy of National Institute of Aging

For more information about Alzheimers, check out “Unraveling the Mystery” by the National Institute of Mental Health.

This research could potentially benefit both species. Researchers hope to create new tests that could diagnose Grass Sickness in horses earlier. Horses diagnosed in the acute stages have a much greater chance of being nursed back to health.  With around 2% of horses dying from Grass Sickness each year in the United Kingdom, early testing could save a lot of lives.