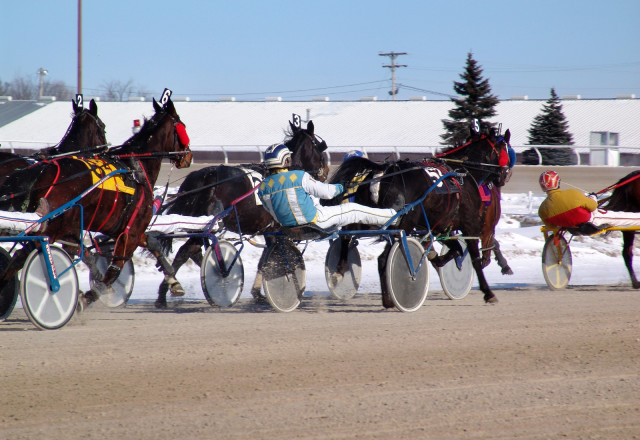 Standardbred racing’s days are numbered at two Chicago-area tracks in trouble: Maywood Park is already shut down while Balmoral Park is scheduled to close at the end of this year.

Though Maywood Park was the first track to hold betting on harness races, way back in 1946, its historical significance means little in the face of bankruptcy. The last Standardbred harness horse crossed the finish line on Friday, October 2, 2015, symbolic of the end of an era in Chicago racing. Owned by the Johnston family, the track has been in bankruptcy since December of 2014, as has Balmoral Park, owned by the same family.

Illinois, unlike other states who have modified their gambling laws, does not allow slot machines or other casino-style gambling within its racetracks. Therefore, the tracks are in competition with a number of nearby casinos and simply can’t keep up. Maywood Park, however, was originally given a closing date at the end of this year — last Friday’s final race creates a hardship for the people of the industry, whether it’s the trainers, drivers and grooms, the track employees, or the various industries supported by the racing population — feed stores, harness shops, farriers and the like.

And as is becoming all too common, the ones with the most to lose are the horses themselves. With both area tracks slated to close and opportunities to win purses eliminated, many horses will be out of a job with no other options. Much like the situation narrowly avoided in Texas earlier this summer, it’s impossible to believe that all of these horses (and their connections) will be able to move to new tracks to pick up where they left off in Chicago.

Through the lens of the equestrian world, it’s easy to forget that horse racing, whether flat or harness, is about more than just the horses themselves — the industry survives through gambling. This is a hard truth to swallow, that the horses are secondary to money. Unfortunately, this is the way of the horse racing industry, and when the money simply isn’t there any more to support the people and horses dependent on the cash flow, it’s those closest to the horses, and the horses themselves, who suffer the most.