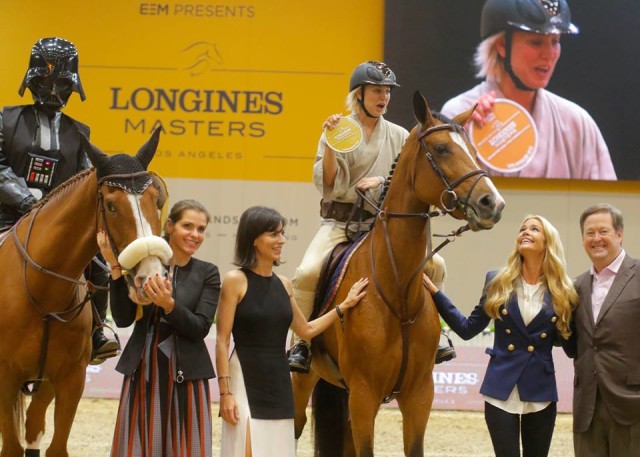 This year’s big winners: our HN homegirl Kaley Cuoco as Luke Skywalker and pro Tracey Wade as Darth Vader. Because when you jump 1.30 m in an oversize Darth Vader helmet, you deserve to win for your charity.

Kaley Cuoco and Tracey Wade for Ride On. ©McCool for EEM

It’s one of the most-anticipated classes of the annual red-carpet affair that is the Los Angeles Masters Grand Slam. In one of the most high-profile and entertaining examples of the equestrian world doing great things to give back to the world community, the Charity Pro-Am Style & Competition lets us see our favorite show jumping stars leave their formal coats and breeches behind and instead don wacky costumes for themed performances. Pairing amateurs with professionals over dropped heights (because no one needs to be scraping the top of the standards in costume), the class runs as a relay, and teams are judged not only on a fault-free performance against the clock but for their costumes and theme as well.

A parade of costumes flashed across the arena and coordinated music boomed through the speakers at the LA Convention Center as eight teams contested for the top prize, the most money donated to their charity of choice. Teams included such themes as “Alice in Wonderland” by Hannah Selleck and Jane Richard Phillips, and “Wizard of Oz” by Jennifer Gates and Jack Towell. However, one team came out on top: the “Star Wars” duo of Kaley Cuoco and Tracey Wade. Their victory benefited Ride On Therapeutic Horsemanship, raising $35,000 for the service.

Here is a spectator’s video of the Cuoco/Wade team performance. I don’t know about you, but performing in a high-stakes jump-off to the very tense score to Star Wars would definitely make me feel the pressure!

And the crowd goes wild! We’re not even going to attempt to figure out how Tracey Wade was able to see what she was doing at all in her massive Darth Vader helmet. Props, girl.

This brief LA Masters overview will give you an idea of the atmosphere at the star-studded equestrian event, as well as a few moments of an interview post-ride with Kaley Cuoco and Tracey Wade: