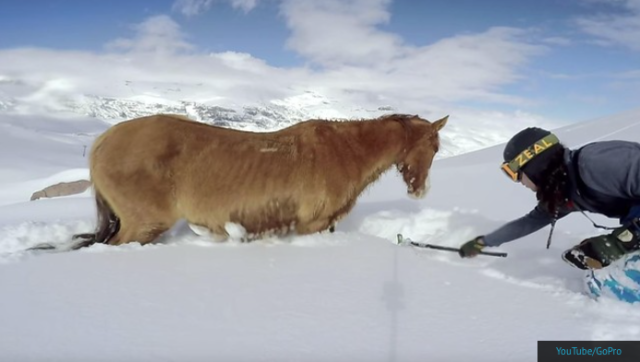 Rafael Pease never could have guessed his 21st birthday would be spent rescuing a horse in the Chilean Andes.

Three weeks ago, Rafael Pease headed out to ride four-feet of fresh powder in Chile with a friend to celebrate his birthday. He thought he saw a rock in the distance, but that “rock” turned out to be a horse.

They dug for hours with snow shovels, slowly freeing the horse from where she had been trapped for four days. The snowboarding rescue party then led the mare down the mountain to reunite with her owners.

Pease later blogged, “I have been through a lot in life, and through it all I have realized that it’s well worth it to watch out for others — whether they are human or not. And that’s what me and my riding partner did.”

Pease is a student at the University of Colorado in Boulder, where he is pursuing majors in Environmental Studies, Geography and Atmospheric and Oceanic Sciences. He founded the Flux Veho Mountain Film Festival and can be followed via Instagram.