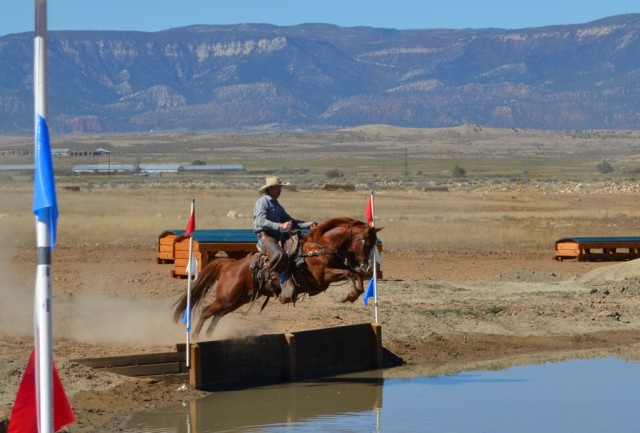 As a fundraiser for the new recognized Horse Trial venue in central Utah, the Skyline Eventing Park hosted The Extreme Horseman’s Challenge in late September and gave locals and eventers a sneak peak of not only the park, but the insanity of the sport.

While many obstacles were outside the confines of eventing, such as a tire pull and getting your horse through a “car wash” scenario, the course also included some of the most intimidating elements of a cross country course, including banks and water obstacles.

Organizers included the banks in and out of the water for the challenge, which this weekend will be included exclusively on the Training Level course at the recognized HT. Amusingly, it seemed that only the eventers were intimidated by this.

“The problem is, I know too much,” said competitor and eventer Carrie Matteson. “In this case, ignorance is bliss!”

Ultimately, the slight intimidation factor of jumping up a level or two for one day did not stop Matteson from “hailing a cab” as they say.

And the cowboys weren’t afraid to test the trend out themselves:

Even the cowboys tried hailing a cab! Photo courtesy of Contoy Arena

Though not every pair had the same luck, and many opted to enter the water from a less tricky spot after a few attempts:

Then, there were a few pairs that just surprised the chaps off of everybody, such as the sequence from this little cow-cuttin’-quarter-horse-turned-tight-kneed jumper:

And this pretty adorable little chestnut:

And the horses weren’t the only surprises. Case in point, these two young’uns making quick work of the course:

With an equal number of eventing questions and trail obstacles, the trophy buckle was anyone’s game, and there were some lightning fast rounds by all types of horsemen at the top. But local, preliminary eventer and equine veterinarian Summer Peterson claimed the top prize.

“This event turned out to be a RIOT!!! Both Western & English riders loved it,” organizers announced on their Facebook page.  “Everybody is requesting more Challenge races so we will do several a year.”

Cowboys will definitely be seeking revenge at the next event, and they may just even the score. And in the meantime, an English sport that might be considered obscure in the rural American West may have gained some new fans and respect in the process.

Many thanks to Skyline Eventing Park and the Contoy Arena for their contributions to this story, both of which are housed at the Sanpitch Event Center in Mount Pleasant, Utah.

We at Horse Nation always recommend wearing a helmet, especially when jumping.