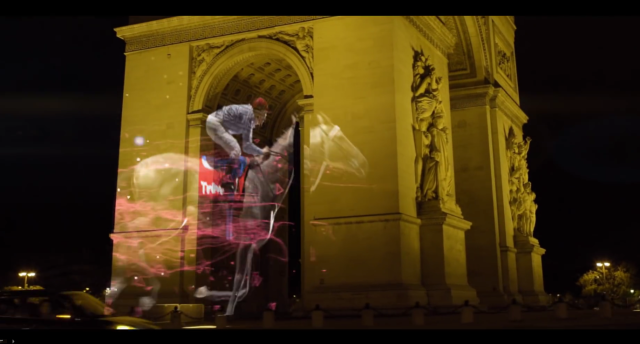 Excitement is reaching epic proportions in Europe as the great racing mare Trêve attempts to make history with a third career victory in this Sunday’s Prix de l’Arc de Triomphe.

As we recover from our summer-long Thoroughbred hangover, induced by American Pharoah’s incredible sweep of the Triple Crown, our attention shifts to Europe, where the sweetheart of an entire continent attempts what may be a much more difficult feat: sweeping the Prix de l’Arc de Triomphe for a third year in a row.

In celebration of Trêve’s anticipated run at history this weekend, her publicity crew produced this amazing video featuring the mare “galloping” through the streets of Paris, projected from a moving car.

What a beautiful way to celebrate this mare, who has captured the attention of racing fans globally!

The Prix de l’Arc de Triomphe (known simply as “the Arc”) is one of the most prestigious horse races in the world, and now the richest turf race of all time with a purse of five million euros to the winner. The race’s slogan is “ce n’est pas une course, c’est un monument”: “it’s not a race, it’s a monument.” Clearly this slogan is twofold, referring both to the actual Arc de Triomphe, an iconic symbol of Paris and all of France, but also the prestige and importance of this race in the European calendar. The Arc is open to three-year-olds and up, run on the turf over 2,400 meters (roughly a mile and a half.)

Trêve captured her first Arc as a three-year-old after an unbeaten season; as a four-year-old, though was beaten in three races, she captured a back-to-back Arc triumph. No horse has ever won the Arc more than twice, so if Trêve captures the prize again on Sunday, she will make history.

Our best wishes to Trêve and her connections in anticipation of Sunday’s Prix de l’Arc de Triomphe!