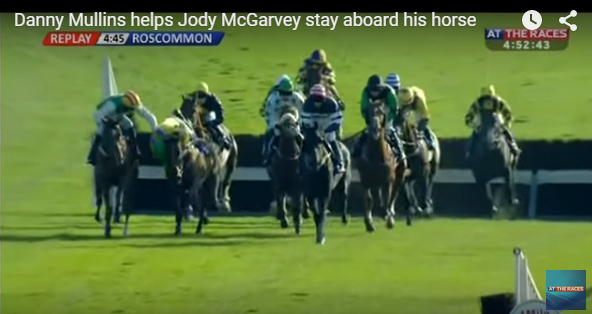 Quick thinking and pure willpower made this epic save a potentially life-saving move.

What would you do if you were in the middle of an intense, adrenaline filled steeplechase and a rival next to you nearly fell to serious injury, or worse? Irish jockey Danny Mullins looked to his left after jumping a fence to see fellow rider Jody McGarvey struggling to stay aboard his horse.

Upon watching the video, it appears that Jody hit his head on his horse’s neck or head on landing, knocking the wind out of him or rendering him momentarily unconscious. Danny, evidently a very quick thinker, grabbed Jody’s silks and hauled him back up onto his horse as he was slipping from the saddle.

It’s really crazy to ponder — you’re galloping at full speed, surrounded by horses, and another rider is in grave danger. Surely Danny barely had a millisecond to register what was happening but had the wits to act swiftly.

We’re all giving Danny a big Horse Nation round of applause today — Jody later posted on Twitter that he was alive, very much thanks to the efforts of his rival. Good on you, boys!