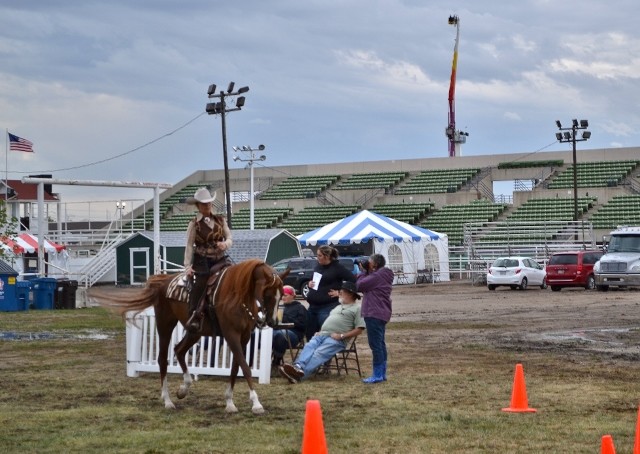 It may have been out of view of the grandstands, but it was no less grand. Lorraine Jackson details the resilience of the horse-crazy folks at the Utah State Fair when rain turned the main show arena into a veritable swamp.

As the equestrian component of State Fairs dwindles nationally, my quirky little home state of Utah continues to put on one of the greatest all-breed spectacles in the United States. This year, that not only meant being willing to show at night under the bright swinging bulbs of carnival rides overhead and amid the gleeful screams of teenagers on the tilt-a-whirl, it also meant donning your waders and being willing to get your show on wherever the flash flood had done the least damage. In this case, that was the parking lot.

An exhibitor shows in the impromptu arena, empty grandstands and glowing catapult ride in the background. Photo by Lorraine Jackson

The All-Breed Show component of the Utah State Fair is organized by the Utah All Breed Association, which puts on a series of shows every summer from Gypsy Vanners to Arabians to Quarter Horses to Morgans and every imaginable American equine staple in-between. And I can tell you from years of showing in various disciplines that there is nothing quite as surreal as the warm-up area of this show: western pleasure Arabians in the middle (slow lane), hunter pleasure quarter horses to the left (less slow lane), drafty-type sport horses to the right (freight train lane), and everyone trying to dodge the mouth-foaming, gaited English pleasure horses darting through the crowd as they please (crazy train lane).

This year it got even more surreal, when during the last dressage ride of the first day of the show, the Heavens opened and unleashed a monstrous desert storm that Utah only sees once every year or two. Within a few hours, the dirt footing of the State Fair arena wasn’t just mud — it was an unnavigable sludge.

Organizing officials said that about a third of the exhibitors withdrew and went home when the arena became an aquarium, but most stuck around to see what could be done.

That’s really the beauty of the State Fair. For some folks, showing at the fair is just for fun and gaining exposure in preparation for their big breed shows. But for another subset, it might as well be the Olympics. It’s the big tamale, the thing you’ve been working toward all year. And organizers were determined to make sure the die-hards got their ribbons.

That first night of crisis, trailers were moved and a postage stamp of grass was coned off, and the judge agreed to judge all the classes with three or less entries that night between downpours.

A rider competes in a single entry class just outside the former warm-up ring. Photo by Lorraine Jackson

Friesian Crosses compete in a conformation class in the impromptu ‘ring’ at the Utah State Fair. Photo by Lorraine Jackson

Rain came and went in the coming days, and organizers opted to bring in a couple tons of sand to fill in the gravel thru-way that connected the barn area to the muddy empty grandstands, essentially making an arena about 100 feet long and 20 feet wide.

Junior riders take the sharp turn at a canter at the Utah State Fair. Photo by Lorraine Jackson

Was it crazy? Sure. But I’ll say this: The people who stayed seemed to have a pretty darn good time, and once you’ve shown there, couldn’t you show anywhere?

I asked Wendy Onstott, who has been showing at the State Fair for the past 50 years, how many times in those 50 years she’d shown in the parking lot.

“Oh, eight or ten times, maybe. It’s the fair! It always rains.” Atop her Arabian hunter pleasure horse, she explains the many places that she’s seen the classes held: impossibly tiny indoor venues, circling gazebos on the lawn; there were even occasions where you had to first lead your horse from the barns through the gaming midway to get to the temporary arena — the glorious days before liability concerns. All of it was a pretty good experience for the horses to learn to do their job anywhere.

Wendy Onstott warms up for her parking lot performance at the Utah State Fair. Photo by Lorraine Jackson

The lawyers may have stripped some of the insanity, but ultimately, come Hell or high water (literally), the State Fair is one of the last great nostalgic traditions of a bygone era that even the horse folks can get in on. As the world of breed shows continues to price out exhibitors with fancy trainers, insured horses, massive indoor coliseums and grand covered barns, there’s one last magical little place where you can show up with your homegrown purebred in a rickety 1960 two-horse straight-load trailer and still have a shot. A place where horses of all kinds – every breed and every price – have to equally endure the tilt-a-whirl, the rain, the parking lot, and a judge who says he’ll stay all night if he has to so people can get their ribbons.

Ultimately, for the state champions, the victory is no less sweet and the garlands no less precious because of the venue. If anything, they can say they survived the true gauntlet test of horse shows: can you handle the pressure of the unexpected, and still make a memory that will keep you warm until the next State Fair?

Rachel Kenyon enjoying a victory despite the rain and mud. Photo by David Jacobson

I know I did. The foot-long corn dog helped.