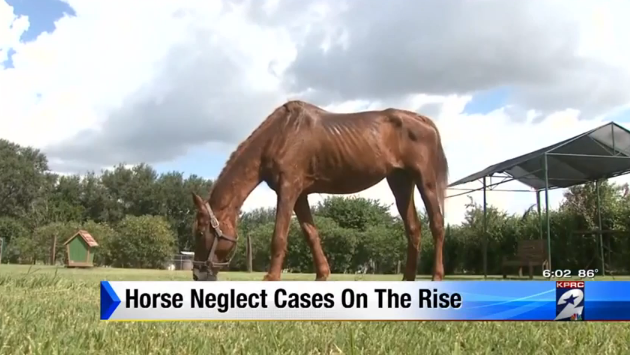 Authorities are overwhelmed with helpless animals in the Lone Star State as neglect cases continue to increase.

The Houston SPCA made news when they seized over 200 horses from a Conroe dairy in June, but now authorities are realizing they have a much bigger problem. Malnourished animals are being found all over the city, abandoned and left to die.

“It’s tragic that in a city this size and as much as this city flourishes, that this is happening in our own backyard,” Monica Schmidt, with the Houston Humane Society, told Click2Houston.

The Houston Humane Society reports there are hundreds of neglected and abandoned horses in the two communities of Acres Homes and Sunnyside alone.

Whether being dumped before or after death, horses are found on the streets daily. Captain Baimbridge told The Dodo, “It’s terrible. If you go down on the main drag — like West Montgomery — you will see at least three, four, five, six horses. But then you go down a side street, and they are everywhere.”

“You can just drive one street to the next and see horses tied to abandoned lots. By the time you get there to rescue the horse, the owner has just moved it to another empty lot,” Schmidt of the Humane Society said.

Acres Homes has a tradition of country life and a rodeo heritage, despite being in the city limits. Rodeos and parades are common in the area, but at the conclusion of the events, the horses are abandoned. This photo was sourced from an Acres Homes resident’s Facebook.

Officials say the area is simply inundated with animals. Horses can be found both cheap and easily at auctions — sometimes for as little as $3 — and on Craigslist. My quick search yielded these two results on the first page of Houston’s “Farm and Garden” section. It would be easy to condemn these owners, but they are at least trying to re-home their animals before winter approaches and the grass is entirely depleted.

The Humane Society of Houston and the Houston SPCA have a number of community outreach programs such as “Career Day: Working with Animals,” a program introducing students to the world of animal care and welfare and “Animals Get Bullied, Too: There’s No Excuse for Abuse,” a program that introduces the concept of animal cruelty to students and how it relates to bullying between peers. They are also exploring the idea of hay clinics and microchipping seminars, since a few of the abandoned animals have later been identified as stolen.

Watch the original Click2Houston story below: