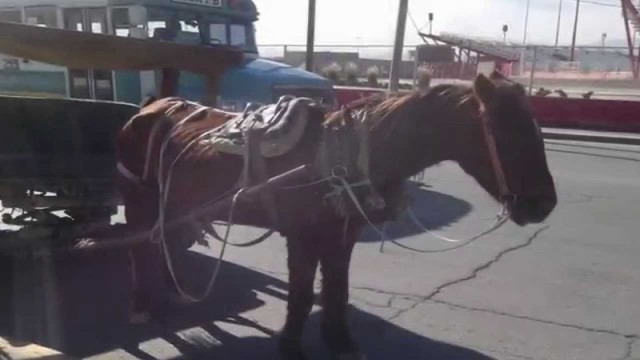 Meet Rafael, the little horse who just may change the way Mexico treats its horses and burros.

Rafael is a 12-year-old Quarter Horse that was severly beaten, abused and starved while pulling a cart in Juarez, Mexico. He was harnessed to the cart night and day.

“He was basically what they call a beast of burden,” said Dr. Christi Camblor, a veterinarian with Compassion Without Borders, a non-profit group helping animals in the United States and Mexico told KCRA.

“He would carry huge hauls of metal around the city, so he was basically loaded up with all the weight he could possibly bear,” Camblor said.

When Rafael could no longer work, he collapsed on the streets. A passerby paid the owner $200 to buy Rafael on the spot. Mexican veterinarian Dr. Sergio Jurado and the the American rescue organization, CAPE, were brought in to assess Rafael’s health. Removing the harnesses from Rafael took close to an hour. Once they were off his body, open sores and wounds could be seen where he had been beaten and where the harnesses had dug into his flesh. He was also severely underweight, which made it difficult for him to cross the border.

But the organization raised over $5,000 to bring Rafael to California. Here he is, exploring his new home!

CAPE is launching a petition campaign, asking for better treatment of work animals like Rafael. Novic claims there are already 180,000 signatures on the petition. They plan on delivering it to Enrique Serrano (Escobar), the mayor of Juarez, next week.

For more information and to donate to Rafael’s care check out CAPE.