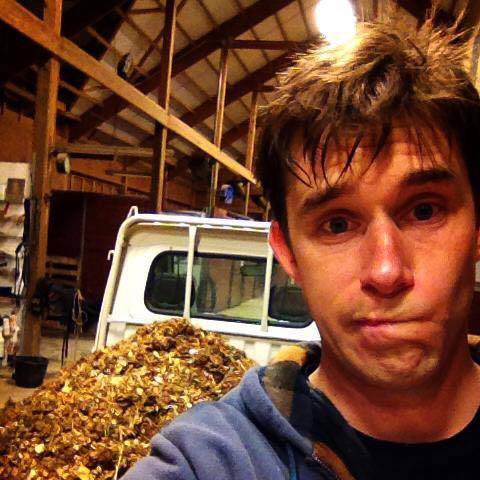 “For people who love horse people.”

Many of you have heard of or know who Elisa Wallace is. An accomplished upper-lever event rider who completed her first four-star at Rolex this spring, she also just returned from a successful trip to Blenheim. Additionally, she has made a name for herself in working with Mustangs. She won the Extreme Mustang Makeover, finished 30th out of 120 entries in the Mustang Million, and was invited to participate in Mustang Magic last year

What you might not know is that the man who supports Elisa is also the man behind HorseHubby.com. Elisa’s husband, Timothy Harfield, is what every horse crazy girl likely wants in a man. He is supportive, cooks, cleans, attends and helps at horse shows, and makes sure Elisa has everything she needs to be successful in her career. He is the marketing director and social media guru for Wallace Eventing and an all around awesome horse husband.

But Timothy did not come from a horsey background. He fought his way though the trenches like most of us horse husbands have had to do — figuring out where to be and how to do something you have no idea how to do. Timothy realized that there was a lack of a place for horse husbands in the trenches just like him to turn to.

“I wanted to create a network that was about supporting men who support horsewomen,” Timothy said. “There are articles written about horse husbands by women, but they too often represent men as ignorant, albeit adorable, dopes. I wanted to provide a space for horse husbands to share their experiences from their own unique perspective.“

Timothy set forth with that goal in mind, and on June 6 posted his first blog on HorseHubby.com, a blog titled “Surviving Your First Horse Show” that set the tone for the future of the network. “Where Horse Hubby differs from the vast majority is it is written from the perspective of the horse husband,” he said.

Timothy has already had a star-studded cast of horse husbands appear on the blog, with interviews and articles from Gamal Awad, Hawley Bennett’s husband; Brian Rutledge, Colleen Rutledge’s husband (who runs her successful Facebook page); Nick Hinze, developer of the CourseWalk app; and Jeremy Newton, co-founder and COO of Giddyup Gear.

As Horse Hubby continues to grow, the next step was for the hubbies to hit the airwaves. Earlier this week, I was interviewed by both co-hosts Timothy and Glenn The Geek for a new Horse Husband episode on the Horse Radio Network. These new episodes will be featured on Horses In The Morning on the fourth Thursday of each month.

The first Horse Husband episode of Horses In The Morning aired live on Thursday, and you can click here to listen to the podcast. This episode features interviews from myself and fellow horse husband Brian Rutledge, so if you want to hear what it takes to be the best horse husband you can be plus the experiences of other horse husbands, tune in.

“I want HorseHubby.com to be a community hub that promotes positive relationships within the equestrian community, while being a lot of fun at the same time,” Timothy said. “A life with horses is crazy, and there’s so much that I still don’t know. It’s a journey for all of us, and one that I look forward to sharing with horse husbands and horse partners everywhere.“