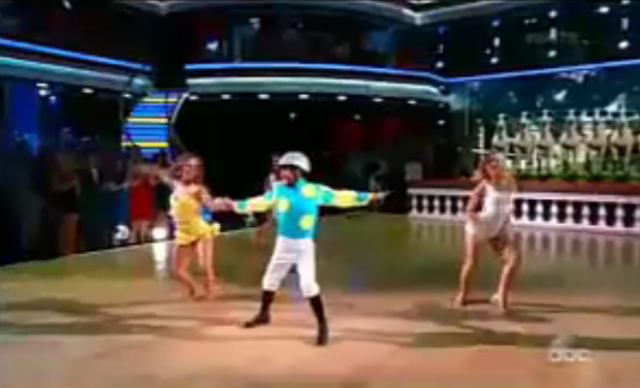 He’s won the Triple Crown, but he’s won our hearts all over again on ‘Dancing with the Stars.’

Arguably, no one is having a better year than Victor Espinoza. He won three pretty important races (the Kentucky Derby, the Preakness and the Belmont Stakes) aboard a fairly nice colt named American Pharoah (shame about that misspelling though.) But all of this pales in comparison to the fact that Mr. Espinoza is now swanning about the floor on Dancing With the Stars: I mean, that guy can really cut a rug.

Okay, that’s actually kind of an exaggeration: Victor explains in the following video that though everyone else in his family can dance, he was not blessed with that gene. He also mentions candidly that jockeys suffer a lot of concussions — and that he basically has no short-term memory, making things like retaining learned dance moves from one day to the next a huge challenge. And, of course, there’s that height difference between Victor and his partner Karina Smirnoff.

But in the usual hardworking classy style we’ve come to expect from Victor Espinoza, he went out there and seriously laid it down. Brace yourself for the return of that bedazzled helmet, some vaguely suggestive horse references (as well as a terrifying moment of Victor galloping to victory on a terrifying horse mask) and plenty of running gags about how “cute and tiny” Victor is. (Zayat Stables was unavailable for comment about this most unanticipated use of their silks.)

We recommend watching these videos full-screen because of the video editing:

Team Espinoff was back for Episode 2 with a mariachi theme:

And once again, DAY-UM, VICTOR. (And wait — was that Art Sherman in the audience? Check out 2:26.) Unfortunately for Team Espinoff, Victor and Karina were the Round 2 eliminated team. But we’re okay with it: for one thing, surely the DWTS production team would run out of short jokes within a few episodes anyway. There’s also another little race coming up that’s very important for that horse we mentioned, American Pharoah, called the Breeders Cup Classic. We’re sure Victor would rather be getting ready for that.

Victor, your time in the dancing spotlight may have been brief, but it was inspiring. Go dancing.