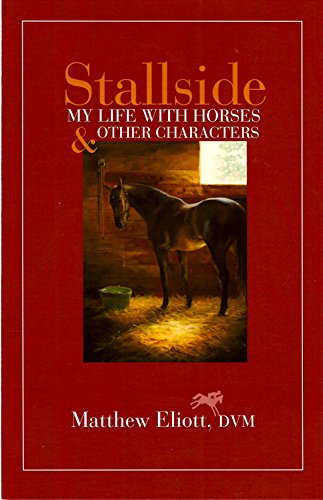 Our HN book reviewer Eileen Cody gives us her take.

Humor me for a second – I tried my hand at writing a joke for this opener.

A boy running barefoot down the dirt roads of his home in Jamaica, a well-bred New York City teen who spends his weekends escorting debutantes to cotillion, an Australian jackaroo, a roughneck on a Texas oil rig, and a practicing equine veterinarian all walk into a bar. The barman says, “hey there, Dr. Eliott, what’ll you have?”

Stallside: My Life with Horses and Other Characters tells the sometimes familiar story of the life of an equine vet, but also one of Dr. Matthew Eliott’s lifelong journey to find his place in the world and the colorful cast of characters he’s encountered along the way.

He strikes a nice balance between humorous and heartwarming in his anecdotes of his travels as a young man and his later experiences as a veterinarian, all with an air of genuine humility – he notes, for instance, that his time spent in Calcutta living on less than three dollars a day “required my being somewhat resourceful but not really — after all, I was living on double what most Indians made,” leading him to realize at a young age that more truly can be found in less.

Dr. Eliott certainly didn’t follow a traditional path to veterinary school: after leaving the West Indies behind for his mother’s native New York City at age eight, the teenaged Matthew hitched a ride on a shipping freighter bound for Australia immediately after graduating from his elite boarding school. He spent the next several years backpacking across the globe, finding odd jobs to help him scrape by before finally deciding to enroll in vet school at UC Davis, eventually opening his own practice in the coastal hills of California (his estranged father’s native land where he’d never so much as visited until he arrived for school). There, he was welcomed with open arms by the equestrian community, which ranged from working ranches to racing Quarter horse breeding farms to upper-level dressage training facilities, and despite his lack of knowledge of the area or familiarity with the ins and outs of the industry, he quickly carved out a niche for himself by way of his skill and good nature.

As an equestrian with a penchant for travel (two cost-prohibitive and largely contradictory interests, I know), I was fascinated by his depictions of the diverse cultures he immersed himself in. Whether it was his charming childhood in the West Indies, riding to school on the back of the gardener’s bicycle and scooping out the meat of a freshly-picked coconut for an afternoon treat, or driving across miles of Australian outback on a blistering hot Christmas Day for a trip to the beaches along the Indian Ocean, his adventures are brought to life by the honest and in-depth nature of his storytelling.

And, of course, what struck me as a horsewoman was the eye-opening variety of equine emergencies and mishaps he’d been called to treat, as well as the on-the-spot creative problem solving required of a medical professional treating animals who can’t simply point to where it hurts. From the “bellyachin” mule whose owner tried everything from bourbon to turpentine to brake fluid in the ears before calling the vet out, only to find that he’d developed an impaction due to a buildup of roundworms (the old farmer’s tobacco juice approach to deworming having apparently lost its effect); to extracting stem cells from a zedonk’s (that’s a zebra crossed with a donkey, for the uninitiated like myself) bone marrow to help heal his damaged tendon; to a nail-biting encounter with an inexplicably paralyzed young paint horse that seemed to be heading toward an unhappy ending until his owner mentioned his sire — a talented halter stud by the name of Impressive, known to us today not for his ability in the show ring but for the genetic disorder he passed down to many of his offspring causing dangerously high levels of blood potassium and, in serious cases, paralysis; Dr. Eliott has truly seen it all, or just about as close to it as one person can get, and we’re that much the better for him sharing his experiences with us.

In closing, though, I’ll leave you with a quick disclaimer: as horse people, we’re all probably used to things getting a little messy, but if you’re especially squeamish, I’d go ahead and skim a few of the more… ahem, vivid chapters, such as one titled “Gonad the Barbarian,” which regales readers with the story of the gelding of a three-year-old Quarter horse stud who “may be small footed but he made up for it elsewhere.” And, as you might expect, good times were had by all.

Eileen’s love of reading goes back almost as long as her love of all things equine, and while her literary interests are about as varied as her equestrian ones, horse books naturally dominate her shelves. Find her a horse book she won’t read or a discipline she won’t try, and she probably owes you a drink or something.