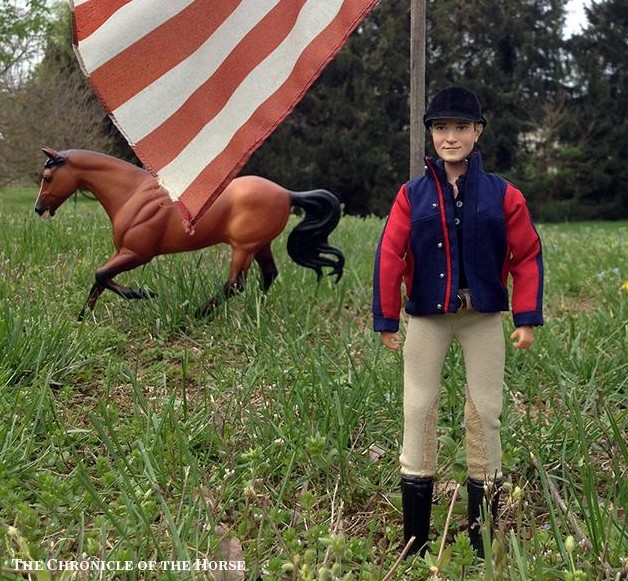 A George Morris doll. That you can put on your Breyer models. That will bark 20 of George’s best catch phrases. That will also raise money for charity! Win-win-win!

A true American equestrian hero, deserving of his own action figure. Photo courtesy of Chronicle of the Horse.

Yes, equestrians, your dreams have come true: George Morris, at last, is an action figure. Even better: it speaks, with twenty of The Master’s greatest quotes. The George Morris action figure is the brainchild of Mark Bellissimo (owner of The Chronicle of the Horse) and created in partnership with Stephanie Macejko of Breyer Horses and George himself.

According to a press release from The Chronicle of the Horse, “Tiny George Morris” will be packaged in a special collector’s box, including highlights from Morris’ outstanding career; the figure is officially debuting at the Central Park Horse Show which is running right now through September 27, 2015. Only a few thousand of these action figures are being produced, making it a true collector’s piece on a first-come first-serve basis.

We can hear it now: “You ride like a soup sandwich!” Photo courtesy of Chronicle of the Horse.

A “Tiny George” will set you back $100 — and all of those funds are going directly to charity, the Chronicle Support Network’s Fidelity Charitable Gift Fund. The Chronicle Support Network was launched by the Chronicle and the Bellissimos, Mark and his wife Katherine, to help connect equine-based charities all over the country. The partnership with George Morris and Tony Fleischmann, President of Reeves International, Breyer’s parent corporation, marks the kickoff for this fundraising intiative.

“There are so many great charities and individuals who incorporate horses either directly or indirectly to serve those in need, those organizations dedicated to protecting these great animals, or any other organizations who promote affordable access to horses and horsemanship. Katherine and I thought it is critical for us to ‘chronicle’ these efforts in a central place that will allow for these organizations and individuals to tell their stories as well as create network for collaboration and fund raising. Our goal is to raise and distribute millions in this effort.

So whether you’re looking for a professional action figure to school your Breyer models, or an unforgettable gift for a horseman in your life, or a tiny copilot to sit with you in the saddle and tell you what he really thinks about your riding, the George Morris action figure is a win-win for everyone, most of all for the numerous charities that will benefit from the proceeds raised.

Updated 9/25 11:03 AM: The Chronicle has released a new video featuring some of the doll’s 20 classic George Morris statements. (Must be logged in to Facebook to view.)

The George H. Morris Talking Action FigureDo you hear George H. Morris’ voice in your head when you ride? Now you can hear it any time! For all the details, CLICK: http://www.coth.com/george

Posted by The Chronicle Of The Horse on Wednesday, September 23, 2015

Want to order your very own George Morris? Place your order on the Chronicle of the Horse today for this limited edition!

Photo courtesy of Chronicle of the Horse.