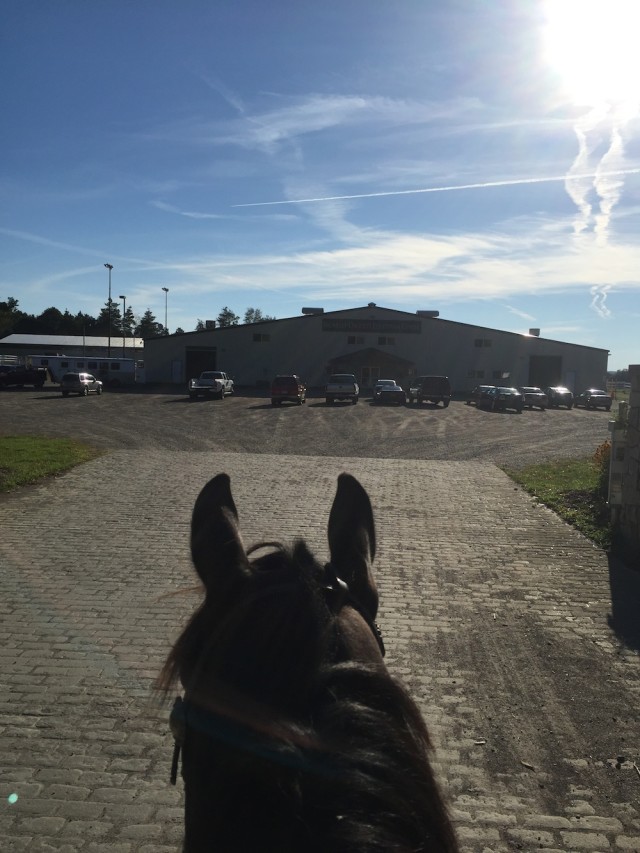 Cricket’s freshman year is off to a great start!

Cricket and I have now been at Alfred for almost a month, and we are both happy here. I’ve been asking everyone and anyone who sets foot in the barn if they would like to ride Cricket. He’s practically a seasoned veteran by now and has even started to be scheduled for practices while I’m not at the barn (nerve-wracking at first, but he seems to be on his best behavior even when I’m not around).

Trail riding is still our favorite pastime, and luckily we have trails available and fellow explorers to go with us — earlier this week, one of my friends and I managed to convince our coach Harry Hurd to trail ride with us, which resulted in a discovery of new trails and a beautiful view of the nearby Foster Lake.

His worst offense during riding thus far has been an unexpected “exit stage left” that he very sneakily managed while my friend Eileen was riding him for the first time. She was loping along the rail in the indoor arena, which is accessed by sliding doors in the middle of either long side. That day, the doors were open and there was a hunt seat practice going on in the other arena outside. Without any warning, Cricket broke to a trot and did a surprisingly athletic scrambling half-pass/duck maneuver out the side door and into the aisle.

Eileen stopped and turned him around immediately; Cricket’s expression clearly said “oops” with his big innocent eyes. Everyone was doubled over in laughter, Eileen included, and she decided to try loping again but this time with two hands. The second time was a success, though decidedly less amusing than the first. My main source of consolation in this instance is that during horse shows, those doors will be closed to prevent my silly horse from making an escape to go watch the other arena.

Aside from riding, the love saga of Cricket and Lil Jake came to a dramatic end last week when Lil Jake was moved from his stall in the main barn into the hay barn — he and Cricket rarely see each other anymore and are too far away to even call back and forth (I am not at all upset about the latter).

The best part of college

The IHSA season is in full swing: the first western show is next weekend, and I am most definitely more concerned with how Cricket will do than with how I place.