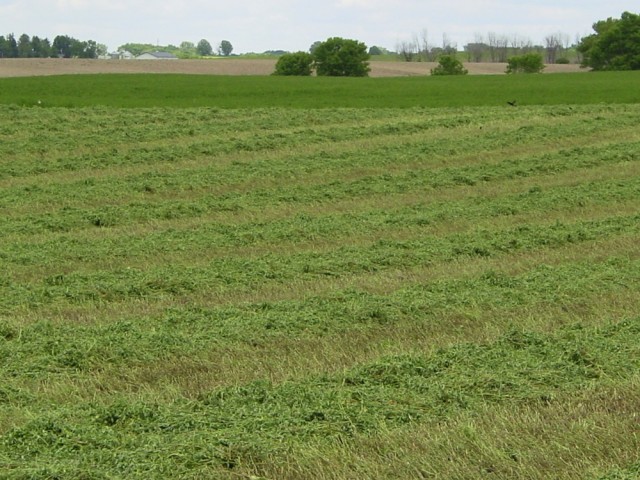 Alfalfa hay grown in Kansas and shipped to Murphy Farm Hay and Feed in Louisburg, North Carolina has been discovered to contain blister beetles, which emit cantharidin when crushed. This toxic chemical causes blisters on bare skin when a live beetle is accidentally crushed, and the cantharidin in dead beetles that are crushed during the haying process are a threat to livestock. Because the cantharidin levels in individual beetles can vary, the severity of poisoning in an animal consuming contaminated hay may vary as well. Horses are more susceptible than other animals to cantharidin toxicity.

Among the four varieties of blister beetles common in the eastern and central United States, the striped blister beetle contains more cantharidin than the other species. The striped blister beetle also tends to congregate at the edges of fields in concentrated numbers, meaning that a few bales can contain a lethal number of beetles while other bales from the same field may be beetle-free. (For more information about the blister beetle, see the University of Kentucky College of Agriculture page.)

Four horses in North Carolina had died as a result of blister beetle toxicity on Monday, as reported on Rate My Horse PRO. The three horses and a pony displayed signs of distress through sweating, white gums and foaming mouths. Another two horses were reported dead in southern Virginia, presumably after eating hay from the same shipment.

Murphy Farm Hay and Feed issued a voluntary recall with a refund for the affected three loads of alfalfa that had been shipped in from Kansas and was notifying all customers who had purchased the hay. Some of the hay may have been purchased by other feed distributors. The name of the farm that grew and baled the alfalfa has not been identified. The North Carolina Department of Agriculture and Consumer Services has issued a stop sale on the affected hay.

Other symptoms of cantharidin poisoning can include inflammation, colic, straining, elevated temperature, depression, blood in the urine, increased heart rate and respiration, dehydration, sweating, diarrhea and death. Cantharidin can kill a horse within 72 hours, so if horse owners notice these symptoms after feeding their horses alfalfa, they are encouraged to call their veterinarian right away.

We could not find a creative-commons licensed image of a striped blister beetle, but the following embedded post from Rate My Horse PRO shows what to look for:

HEALTH ALERT: Blister beetles have been found in a shipment of alfalfa shipped to North Carolina. A story you’ll see…

At this time, the three loads of hay originating in Kansas and shipped to North Carolina are the only known sources of blister beetle poisoning. Nevertheless, we encourage horse owners to stay vigilant regarding their hay.