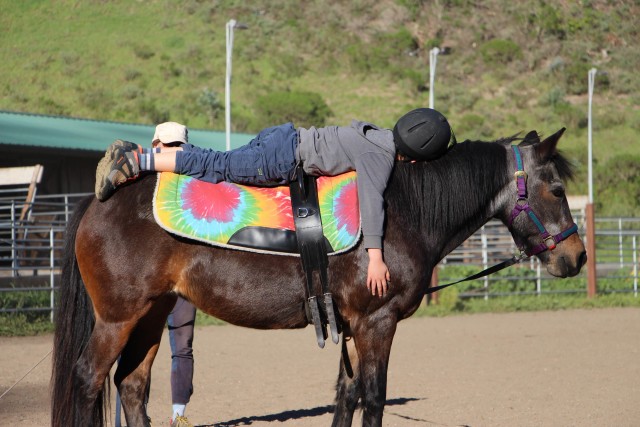 Tessa Biggs reflects on her weekly sessions with a young autistic student at the Square Peg Foundation, where she herself has learned that life’s little victories can lead to the greatest truths.

On Sundays I drive to a barn in Half Moon Bay. Eucalyptus trees line the winding dirt road and crisp ocean air fills my lungs. It’s a magical spot — but what makes Square Peg special isn’t the location. Square Peg is a safe haven for people (mainly autistic people) and horses (mainly off-the-track Thoroughbreds). Instead of being considered worthless or lost causes, these OTTBs invoke smiles, shrieks of delight and even tears of joy in both autistic and neurotypical people.

I’ve watched a four-year-old child tell a seven-foot-tall OTTB to nod, give her a kiss and smile. For a child who struggles to make eye contact, this illuminates the idea of communication.

On a chilly Sunday morning in February, I met a little boy named J and he changed my life. Out of the fog a wild-haired, pink-cheeked, six-year-old emerged with a smile that could kill and and a giggle that rang out. I fell in love.

This past year, I’ve spent every Sunday with J, playing hide and seek and tag and watching him grow. We’ve invented songs, built forts, caught lizards, wrestled and gone riding. No matter how terrible my week had been, he brightened it. One week, he created handmade shirts for everyone. Another week, there was a jumping lesson that HE got to teach, with a singing lesson afterwards.

But J fell into a rough patch: terrible frustration, violent tantrums, and negotiations. To him, punching, kicking and spitting were how he communicated his anger. The worst part: he was unable to explain to us his inconsolable frustration.

Before we continue, I need to clarify: at Square Peg, acceptance is absolute. Elsewhere, acceptance is a privilege that can be bestowed or revoked depending on a child’s behavior. Acceptance, patience and kindness are fundamental to any child but even more so one facing neurological challenges.

After several explosive sessions, we knew the game plan needed to be changed.  J is a natural leader; his creativity blossoms when given a task. When J arrived, we greeted him with hugs and told him our news: “Hey dude, guess what? You get to build your own obstacle course, and we will do it with you. You teach us!” J shrieked in excitement, grabbed the pony, and bolted to the arena. His eyes became fiery with determination. He began to rearrange the course.

Surprisingly enough, after we told him his time was up, J happily mounted the pony and rode the course. Over the next hour, J showed us each new combination. Sometimes it was “around the barrels and through the hula hoop,” and other times I had to canter around like a horse while he chased me, giggling uncontrollably.

While this seems like such a small event, he stayed focused, asked for permission to dismount, and thanked us at the end of the lesson — a profound breakthrough. J still has incapacitating meltdowns, but he is learning to communicate his needs in a nonviolent way.

Author Paul Collins wrote that “the problem with pounding a square peg into a round hole isn’t that the hammering is such hard work, it’s that you are destroying the peg.” It isn’t about forcing those who are different into a predefined mold, it is about changing the mold of society to support and help the individual thrive.

Square Peg has taught me that sometimes it’s okay to fall on the floor laughing, to go with the flow, to check your ego at the door and openly make a fool of yourself. I have learned that depth and intellectual greatness lie in every individual.

About Tessa: I’m 14 and a freshman in high school. I own 3 horses, and started eventing this summer. I’ve been with Square Peg for about a year and a half and have cherished every moment. I school horses, work with the kids and do pretty much everything in between. They’re an amazing organization and bring so much joy to my life and the lives of others.

The Square Peg Foundation is an adaptive riding program that was started in 2004 and is located in half Moon Bay California. Our facility is home to ex-racehorses that serve as the healers and friends to our families. As Tessa states so beautifully, our main focus is to serve the autism families in our community through acceptance and fun, which include horsemanship lessons, writing, annual surf camp out, and community events. To learn more about the Square Peg Foundation, check out Horse Nation’s Standing Ovation as well as the Square Peg Foundation website.

What’s YOUR story? We love sharing reader essays and submissions — email yours to [email protected]