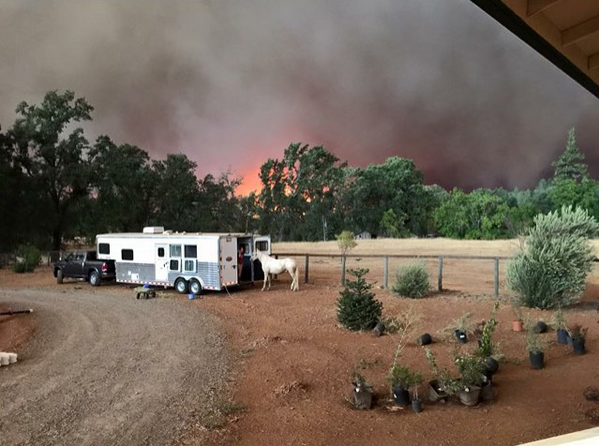 The Valley wildfire, fueled by drought conditions, has leveled whole sections of small towns in northern California. Residents and communities are coming together to help those displaced by the fires — both human and animal.

The American West has seen an already-intense wildfire season, fueled by years of drought and prime conditions for fast-spreading fires that are difficult to contain. California in particular has been hard hit — but the Valley fire, which roared quickly to life about 90 miles north of San Francisco, set new and terrifying standards for what Mother Nature is capable of unleashing. As of Tuesday, September 15 at 6:45 AM Pacific time, 67,000 acres have burned with only 15% contained, 13,000 people have been displaced and 585 homes have been destroyed. There has been one reported death. (See more statistics here.)

The fire was first spotted on Saturday, September 12; the cause of the fire is still unknown. Extremely high temperatures from the previous week helped further dry out trees suffering from the multi-year drought; when temperatures dropped over the weekend, winds picked up which helped to fan the flames. The wildfire traveled at what was described as “astonishing speed,” with dry trees sending ash embers a quarter- to a half-mile away, making containment almost impossible. Fire spread quickly through small rural communities in Lake County, such as Middletown, which has been nearly wiped off the map. With only minutes to evacuate as the fire roared through town, many residents were forced to turn their pets and livestock loose, hoping they would fend for themselves.

And amazingly, many of them did: while there reports of dead livestock and horses in many of the fire-ravaged areas, there are plenty of stories on news sites and social media of residents returning home in declared safe zones to find their dogs, cats, horses and more waiting patiently for their people. One such story describes a family returning home to their ranch to find the dog they had been forced to abandon hanging out at the unburnt house, while firefighters helped round up his alpacas and feed them hay. Various animal rescue groups, working with volunteers and local feed stores, are trucking in hay and helping to gather loose-roaming animals. Some communities, like most of Middletown, are still closed to residents as conditions are too dangerous, so many owners still don’t know if their animals survived the fire or not.

Many temporary disaster shelters have been totally overwhelmed with donations, both for pets and people, and have requested that further donations be channeled through the Red Cross who can distribute them where most needed. Social media has responded in kind with multitudes of lost-and-found pet groups sharing photos and messages.

If you’d like to help victims of the Valley fire, are located nearby and can offer assistance, or want to offer a message of support:

Here are some of the scenes from around the Valley fire via Instagram:

Helping evacuate horses today. So happy to see people getting their animals out safely. #valleyfire

On my out to #valleyfire. We’ve got a truck load of food and medicines. Burn victims and animals steadily coming in. I will post update on who needs more help, donations and supplies. Please stay tuned.

ABC7 News’ Sergio Quintana tweeted this photo of goats that survived the Valley Fire. Fortunately, Hidden Valley Lake neighbors nearby were able to feed them. Go to ABC7 News for the full story and a list of resources. #ValleyFire #NapaCounty #LakeCounty #abc7news

Tank visiting with four lucky horses safely rescued from the #valleyfire My heart goes out to my friends and everyone else affected by this terrible #wildfire I have space for more animals if anyone needs help. #lakecountyfire

Ugh why did he not get in I am sick I tried for hours. PLEASE. If anyone has heard anything of any horses spotted that look like palladium or a buckskin or two little ponies please dm me

Oh my god they are all here and alive and well. I’ve been trying to tell you guys for hours but I had no service. The ponies pasture burned and they got loose but they stayed home. Buddy is in the roundpen with Palladium. There was 2 other stranger horses loose here to. Everything has burned including my neighbors house but my house, barn, and all other structures have no damage whatsoever. God is good. this is a conplete miracle. Everything is burned and gone except for my place. All my horses are completely okay (besides damage from inhaling the smoke). I got another trailer in and we rescued all of them including the 2 loose stranger horses. All my horses are on the trailer and we are going to a place that is taking them

Special thanks to Halle Teague for collecting donation links.