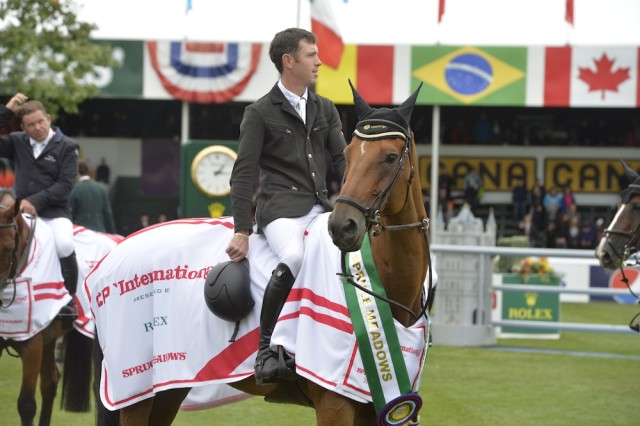 Scott Brash is the first-ever champion.

Ian Millar of Canada prophesied that the “first rider to win the Rolex Grand Slam will be the hero of heroes.” That hero now walks among us: Scott Brash of Great Britain has won show jumping’s highest honor and conquered three of its biggest challenges: the Masters tournaments of Geneva, Aachen and Spruce Meadows.

As Eric Lamaze states in the video, it takes perfection to win the Grand Slam: winning one of the Masters alone is usually enough for any grand prix rider’s bucket list, but winning all three is the stuff of dreams.

The format for the Rolex Grand Slam sounds simple in theory: a winning rider must win all three Masters tournaments back-to-back-to-back. He or she does not have to ride the same horse. Capture all three, and not only does the rider get to take home the coveted Rolex Grand Slam trophy, but he or she also nets a cool one million Euros for the horse’s owner. Being among the most prestigious three grand prix in the world, however, the Grand Slam remains — until now — an elusive honor that does in fact require near-perfect precision across the world to capture.

Even just by competing at Calgary, Brash, aboard the uber-talented Hello Sanctos, was already winning 500,000 Euros — but it wasn’t just about the money and prizes for the twenty-nine-year-old rider. As he states in the video above, he is happy to have Hello Sanctos receive the recognition he deserves as one of the best horses in the sport. Brash and Sanctos are fast becoming the stuff of legends, after winning back-to-back Global Champions Tours in 2013 and 2014 as well as a team Olympic gold medal in 2012.

We can’t wait to see what’s next for Brash and Hello Santos, among the other talented horses in his string. Go Scott Brash, and go riding!