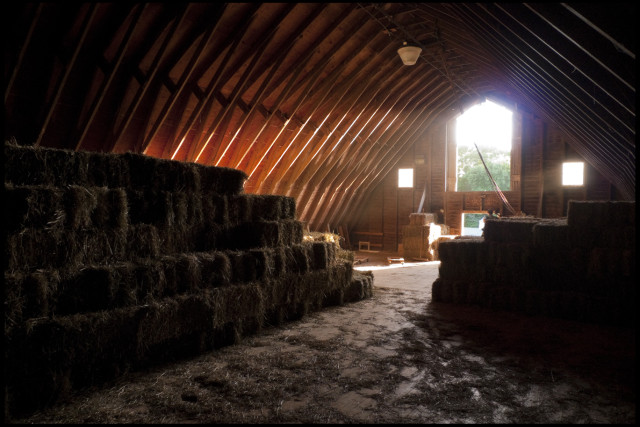 Few things are more satisfying than knowing that you’ve got a full loft of sweet-smelling hay. But danger can lurk in the hayloft — we’ve outlined how to prevent hay fires in the barn.

On August 23, fire damaged a hay barn at University of California (UC) Davis’ agricultural facility. No human or horse injuries were reported and the fire was under control in just a few hours. The cause of the fire was ruled to be spontaneous combustion within the hay.

While the UC Davis fire was about the best possible outcome we could imagine, it serves as a sobering reminder that barn fires don’t always end like this: barns can be destroyed, equine and human lives lost. As you fill your lofts with hay for the winter, it’s important to remember that hay fires can start easily — but they can also be easily prevented.

What causes spontaneous combustion in hay?

Hay bales provide the perfect home for mesophilic or warm-temperature bacteria, which gives off heat in its normal life cycle: most bales of hay, especially those baled with moisture content higher than 20%, contain mesophilic bacteria which live and die naturally as part of the hay’s curing process. But if the moisture content in a bale is too high, the heat released by the mesophilic bacteria create prime conditions for thermophilic or high-temperature bacteria. The temperature in those bales rises exponentially until they reach the critical point of 170 degrees or hotter, and combustion occurs.

Preventing combustion in hay at the baling stage

If you purchase your hay, this part of the process may be totally out of your hands, so it’s important to make sure your hay is coming from a reputable source who you know is dying hay appropriately before it’s baled, or is at least up-front with you about how the hay harvest went. Ideally, hay should be mowed and then allowed to dry in the field for at least one full day before being baled, though this can vary regionally. If weather conditions force a farmer to bale his or her hay sooner than he or she would like, conditions can be right to produce hay with more than the ideal 20% moisture content.

Okay — you’ve got your hay all baled at the perfect moisture content, or your reputable hay farmer is delivering a truckload to your barn, so it’s time to make sure you’re storing it properly. The hay still likely needs some time to cure, so it’s critical that your stacks allow for air flow while protecting the hay from the elements — rain or snow can add moisture and kick-start the bacteria process all over again.

The air should have room to circulate above, between and below the bales: those old-barn wooden loft floors with the slightly sketchy-looking gaps between the planks are actually designed that intentionally. Hay stacked on a solid floor or stacked outside should be placed on a wood pallet for circulation and to keep moisture from soaking in from beneath. Cross-stacking bales is also a good practice, both to keep your stack a little sturdier and for airflow. Smaller is safer when it comes to haystacks: massive bunkers of hay don’t get a lot of hay circulation in the middle, providing a good location for those heat-loving bacteria to start cooking away.

UC Davis’ separate hay storage was an ideal setup for barn safety: if it’s possible to store your hay in a separate (but still conveniently nearby) building, consider doing so to keep a potential fire source away from your horses and animals. I worked at a barn which stored four to six months’ supply of hay in a separate facility and we hauled a day’s supply at a time to the main barn. However, this isn’t a reality for everyone — so if your loft is attached to your barn, keep your hay higher than the horses as fire travels upwards.

Any time you suspect that your hay feels too hot, or you can smell a “sooty” odor in your hay storage, don’t hesitate and don’t fool around: call the fire department right away and carefully remove the hay from the barn. Fire requires heat, fuel and oxygen — so keep in mind that the process of moving hay can provide oxygen where it may not have been available and trigger combustion in longtime-smoldering bales. Use caution!

As summer winds down, you’re filling your loft and your horses are starting to spend less time outdoors, remember that education and prevention can be lifesavers. The embedded links in this article will take you to websites with a wealth of information about hay combustion with more safety tips. Keep your barn and your horses safe!