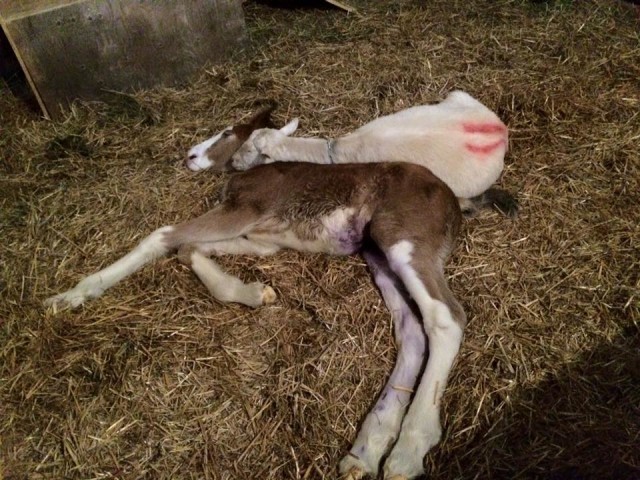 And the result is the cutest thing ever.

From Emily of Priest Welsh Clydesdales:

It all started when we found out that our mare Priest Valley Ruby Jubilee was in foal to Welsh’s Titan Prince. For those of you who have horses … you all know we have that one horse that is your big baby. Ruby was my one. We had a lot of sleepless nights at the end of March. Ruby was about a week overdue and finally went into labour on April 2, 2015 at 2:30 am. The labour of the filly was picture perfect, as if it were right out of a textbook. The filly got up after about 10 minutes and as soon as Ruby was up she latched on and sucked. Ruby cleaned shortly after. Everything was awesome. We went to the house to get some sleep but found ourselves laying in the spare room watching the foaling camera just staring at them. We were mesmerized and it had felt like we won the lottery. Our hearts were so full of love.

Heartbreak soon set in about noon the following day. Ruby seemed uncomfortable so we called the vet. I am not a vet – I don’t want to write down her diagnoses wrong – but the end result was that we had to put down Ruby at 4:00 pm. My life turned upside down. I didn’t even like the idea of being in the barn, but we now had this little filly that was alone and needed help.

Our parents all came to our aid knowing how devastated we were. They brought bottles, milk replacer, electrolytes etc. We decided to call her Priest Welsh Ruby’s Legacy and still think it’s the perfect fit! We had posted looking for nurse mares and there was absolutely none … and the filly was still alone. We knew she needed some sort of animal in with her. We decided on a dairy goat that we could milk as well as keep as company for her. Turns out, a dairy goat was harder to come by than we thought. We thought we had exhausted all of our options, until our farrier, Dave Jantzi, returned our call. He went to see a local dairy goat operation that said they would be willing to give us one.

Matt went down the next day and came home with a very nervous goat. She was 1 out of 400 diary goats and now is 1 in a million to us.

We had built a ramp just so it would be easier for us to milk her out, but also on the wild chance we could get Legacy to suck. Our wildest dreams came true and Legacy latched on to Buttercup the goat. Buttercup has taken over the mom role, but we do supplement with bottles.

They have become inseparable! Buttercup protects her, loves her and plays with her.

Legacy is now 5 months old and I was scared she wouldn’t make it past the first week. We owe her life to Buttercup and thank her everyday.

Special thanks to Emily for sharing Buttercup and Legacy’s story!