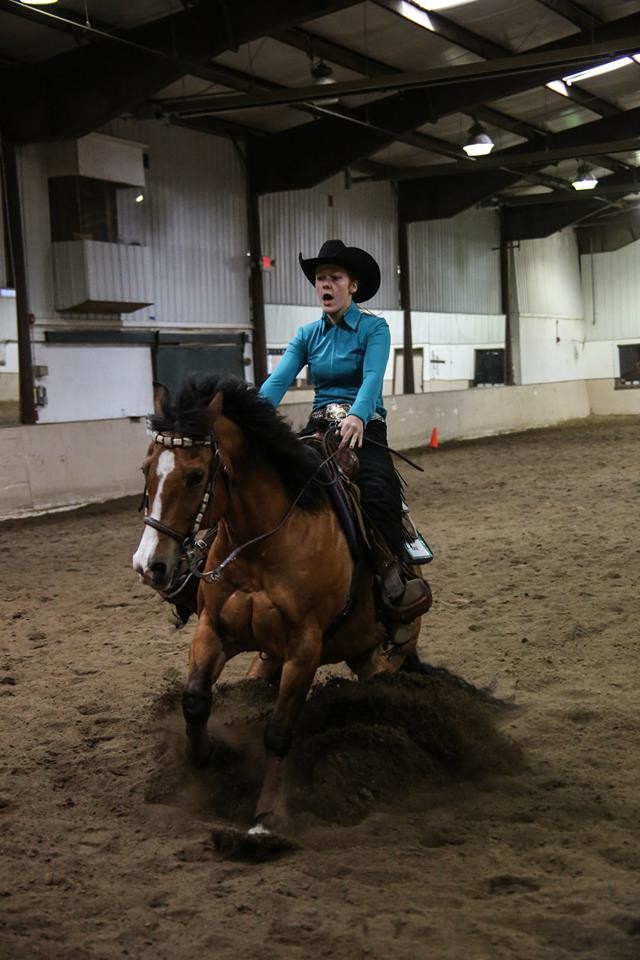 What’s harder: saying goodbye, or not being able to?

“Horse” doing what he did best.

As said by one of my best friends Elena: “I don’t know what’s harder: saying goodbye or not being able to say goodbye.”

It’s a difficult thing as equestrians that a horse’s lifespan is not as long as ours. Although we can all recite the average lifespan, it is an entirely different matter to be able to accept that, if we keep a horse long enough, we will likely witness his death, and that someday your beloved childhood lesson pony or heart horse will lay his head down for the last time and depart from this world.

Even when it’s a horse that’s not yours, maybe you’ve never ridden him or even met him, it strikes home when you hear of a horse’s untimely death. Your thoughts go immediately to your own horse, and there’s a moment of selfish thankfulness that it wasn’t yours that took his last breath that day. You hug him extra tight for a while after, and shed some tears at the thought of losing him.

But sometimes it is your own horse, a tragedy that I experienced when I was eleven: my first horse suffered a severe bout of colic and had to be put down. Having lost a horse of my own and knowing the pain of having to make that decision makes it all the more poignant when I hear of someone else and their best friend having to undergo the same thing.

Today, I got the news that a horse, one I had ridden all summer and taken to our first reining show together just a couple of months ago, was put down this morning. It was a freak accident, unforeseeable and unpreventable, that he broke his leg in the pasture. “Horse,” as he was called, was the most unassuming creature I’ve ever had the privilege to ride — with his eternally fluffy forelock and small stature, it never ceased to amaze me when he went into that arena and executed impressive spins and sliding stops with his ears up all the while.

We always wish for more years, but the memories that Horse left are enough to last a lifetime. He was a champion at heart, both in talent and personality. His “person,” my “sister” Amanda, completed her first NRHA and EPRHA (Eastern Pennsylvania Reining Horse Association) shows on him and placed high enough to earn money, but sweet Horse-man was also talented in other areas — Amanda took him to the New York State Fair and placed second in the reining, losing only to her sister Elena. One of her favorite memories from State Fair was showing in the pleasure classes and then enjoying the stunned expressions on all of the pleasure riders’ faces when Amanda and Horse switched gears and warmed up for reining with a series of impressive spins.

Another story (she insisted I include this) took place at a local-level fun show, where she, Elena, and I convinced the show staff to include a “pairs” class. Elena and I paired up and entered the ring armed with cookies and a bottle of water for the judge, who accepted our overt bribes but placed Amanda and Horse’s pair first anyway. It’s a testament to their teamwork that their talent was able to override mine and Elena’s bribery.

Above all, Horse was a friend. He would carry anyone for hours out on a trail, through a reining pattern, in hunt seat classes or in western rail classes. He would put his ears up and gaze at you with warm brown eyes when you talked to him, and he would turn his head and itch your back when you scratched his withers. His forelock and mane were perpetually frazzled, sticking out in an adorably comical fluff, and his whiskery nose fit perfectly into your palm when he sniffed you in greeting.

My heart goes out to those who have known and loved him much longer and more deeply than I, and there is some small comfort that he’s whole and unbroken again, galloping above the clouds with Bebe, Montana, Cody, and all the other horses that left too soon.